1) Goods Transport Forecast
In the oil tanker market outlook’s oil transport forecast, the global oil production volume and production relative to transport volume trends are incorporated into the forecast. Crude oil transport volume was higher than production volumes in the mid-2000s. However, it has since continued to fall. The changing trend translates into an increase in petroleum product transport volume. Following the Global Financial Crisis(GFC), global crude oil transport volume continuously fell. In contrast, petroleum product transport volume continued to rise from both a bearish global economy and an increase in investments by the United States(U.S.) and Middle Eastern oil states towards oil refineries and petrochemical facilities. It is assumed that this trend will continue for the next ten years. However, over the following five years, MSI expects expansions to oil refineries in Asia and the Middle East.
The main assumptions for long-term forecasting until 2030 are made from the following index. Transport volume up until 2023 incorporates the growth rate of crude oil production and demand from MSI’s forecasts made in a special report for the Korea Ocean Business Corporation. Post-2024 global oil production forecasts utilise BP’s figures as BP annually releases linearly interpolated five-yearly oil production forecasts. It is still assumed that relative to oil production, crude oil transport volumes will continuously fall, while petroleum product transport volumes rise in its place. It is also expected that investments will be completed in Asia and the Middle East by 2H 2020 with moderate increases until 2030. WTI made forecasts using IHS Markit’s August 2019 figures and ship disposal values which reflects an active market in the Mid-Western U.S. LIBOR based on a base-case scenario interest rate of 2.1%. 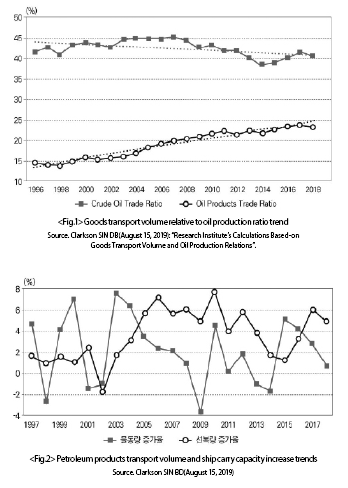 2) Reserve Fleet Efficiency Outlook
The oil tanker market’s transport volume to ship carry capacity is continuing downwards from its highs in 2004. From the mid-2000s, single body hulled oil tanker output started to increase rapidly. As such, with the global economy growing and transport volume rising, ship carrying capacity could not keep up with demand. However, just before the GFC, transport volume growth began to contract and, in turn, transport volume relative to ship carrying capacity began to fall. Following the GFC, to save fuel costs from the rising cost of oil and in preparation for strengthened environmental standards, crude oil tankers began to their sailing speeds. In 2020, with the implementation of Sulphur Oxide(SOx) emissions regulations and strengthened Energy Efficiency Design Index(EEDI) standards, the slow sailing trend will continue. 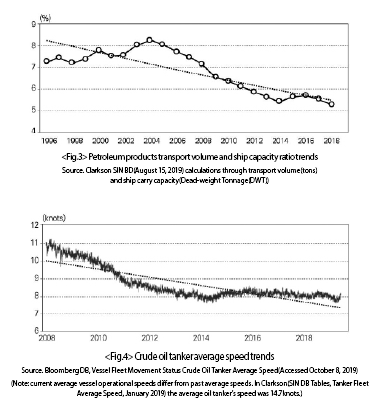 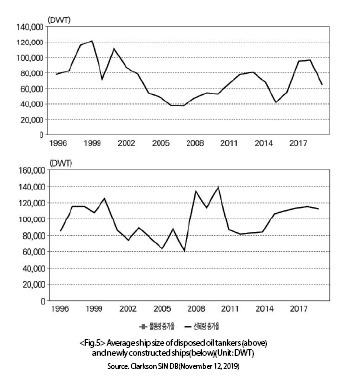 4) Impact of External Factors Such as Technological Development and Environmental Protection Regulations
The effects of environmental protection regulations are considered. In 2017, the compulsory installation of the Ballast Waste Management System(BWMS); in 2020, the Sulphur Oxide emission regulation; in 2022, the implementation of EEDI’s “phase three”; and in 2025, the implementation of EEDI’s “fourth phase” are incorporated into forecasts. As such, more ships are expected to be constructed to replace disposed ships arising due to the environmental regulations and market fluctuations.
Environmental regulations and technological development implementation are expected from 2020 to 2030. As a result, increased demand from positive investor sentiment is taken into account. Additional demand has also been taken into consideration upon conducting several interviews in which experts believed demand would recover in 2020 before the implementation of EEDI’s various phases and rise again in the 2030s with further strengthened regulations. Lastly, the average residual ship quantity demanded is given as a ratio of DWT: Compensated Gross Tonnage(CGT) with all figures given in CGT. 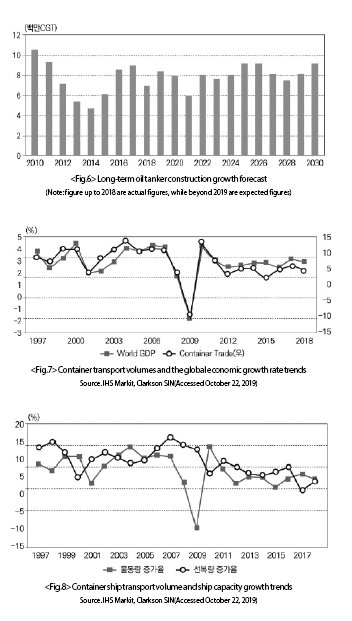 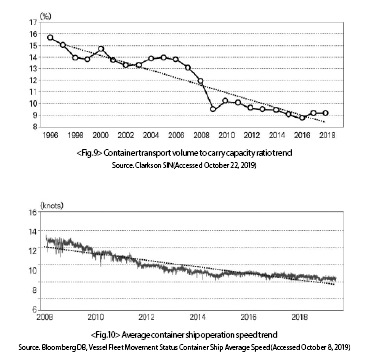 (2) Mid-to long-term container ship outlook
Outlook for the container ship market is formulated based on the same assumptions as the oil tanker market. However, transport volume is based on handling capacity. Container transport volume shares high correlations with the global economic growth rate with a 91.1% correlation between 1997 and 2018. The container transport volume forecast incorporates trends provided IHS Markit’s global economic growth rate table published in September 2019.
The container transport volume grew exponentially during the 2000s in line with an expanding global economy. Even after 2007, shipping capacity continued to grow faster than transport volume. Following the GFC, global shipping companies began to feel the impacts of the slowing global economy; however, the extent of shipping capacity contraction was limited to a slight fall in 2010. The ‘Chicken game’ between shipping companies and larger container ships continued until 2016, leading to an oversaturated market supply.
Following the GFC, shipping companies attempted to overcome the economic downturn by utilising surplus ships and operating ships at low speeds to reduce fuel costs. As a result, from 2009 onwards, carrying capacity relative to transport volumes fell, and has since maintained that trend. As aforementioned, average ship speeds began to fall from 2008 but dropped significantly between 2010 and 2012. Compared to 2008’s average speed, speeds fell more than 25% from 2015. As of 2019, the average ship speed was down 29% from 2008 levels. 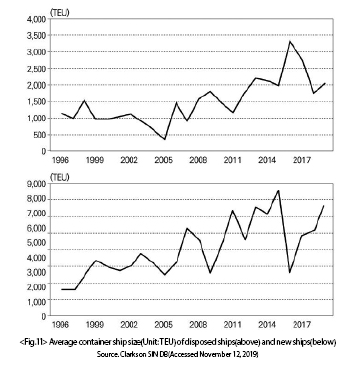 The average disposed container ship size and newly constructed container ship size is also considered. The average ship size differs between years from growing ship sizes and mass construction taken on by shipping companies. In line with the trend of increasing ship sizes, the size of disposed ships also grew. However, according to industry professionals, the growing ship size trend for new ships is expected to cease for the next ten years. This is because, despite reorganisation of ports based around 20,000 Twenty-foot Equivalent Unit(TEU)-class ships, the outcome of investment (to ports and ships) have not been satisfactory. Also, following the confirmed expansion of the Panama Canal, the ultra-large ship market and the mid- to large-ship markets are experiencing polarising effects.
The impacts of environmental regulations, as applied to oil tankers, is applied to container ships. Also, the effects changes to demand volume from key industry-affecting events is applied after conducting interviews with industry professionals. Demand volume was estimated in TEU but is converted to a TEU to CGT ratio for this study. With the onset of ever-growing container ship sizes, the TEU to CGT ratio is growing. However, adjustments are made to normalise the effects of polarisation of ship construction. Upon accounting and adjusting for the variables, the following average construction volume is forecasted: 6.5 million CGT from 2014 – 2018, 6.7 million CGT from 2019 – 2024, and 8.2 million from 2025 – 2030. 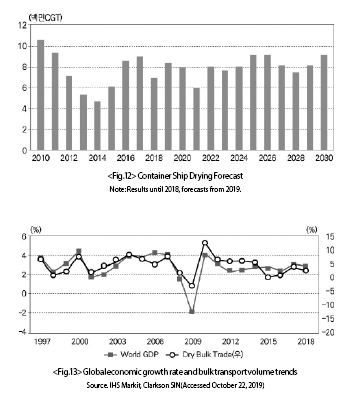 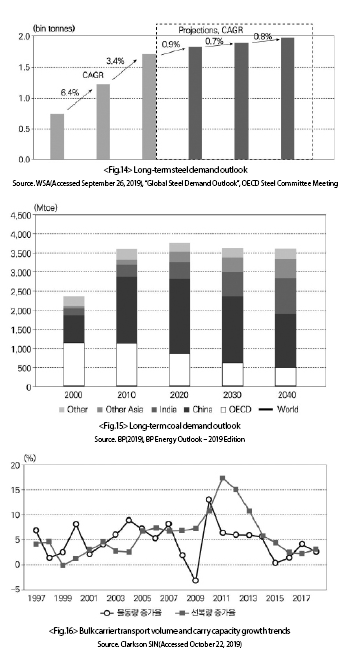 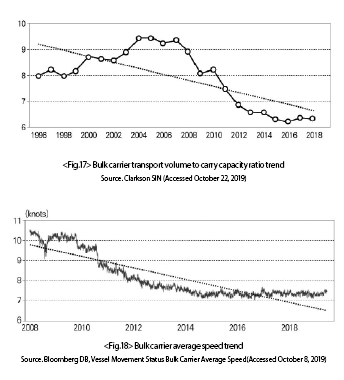 The average size of disposed bulk carriers and new bulk carriers is considered based on previous data. China’s economic growth and steel industry’s expansion has continuously contributed to the growing size of bulk carriers, especially ultra-large bulk carriers such as the Valemax and the Chinamax. 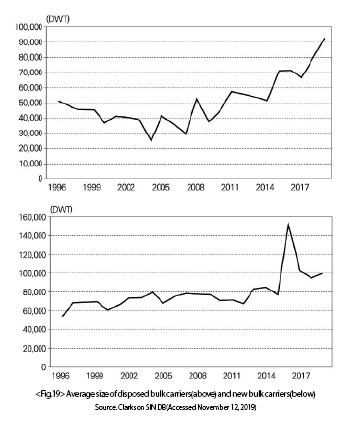 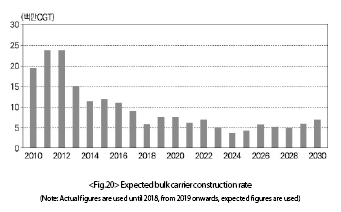