(1) Definition of Korea’s Smartyards Model
Korea’s shipyards are securing competitiveness by capitalising on the skills of experienced labour, mechanisation, automation of equipment required for difficult tasks, and developing a process for continuous production. The integration of technologies from the Fourth Industrial Revolution and pre-existing production technologies has transitioned shipyard production from manual and partial automation to link-automation-intelligence (autonomy)-infrastructure to maximise the reduction of production costs while increasing productivity.
Korea’s smartyard’s link-automation-intelligence (autonomy)-infrastructure model systematically integrates to produce ground-breaking changes to the shipbuilding process. In turn, as this series of core technologies transforms shipyards, the industry’s ultimate objective of cost-reduction, efficiency, high-quality and safety will be achieved.
Furthermore, as Korea aims for technologically advanced and data-centric shipyards, related businesses, both up- and down-stream, are more willing to establish relations centred around technology and data. 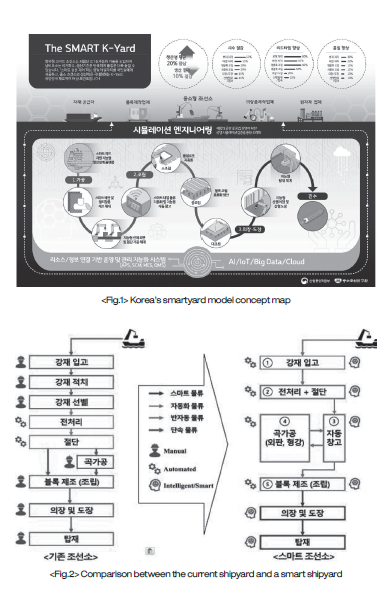 - Link: Various information, including production design information, will be shared throughout the company. A range of production information will be transitioned from manual imputation to automated collection and sharing via sensory and imagery processing.

- Automation: The minimisation of informational error, diminished quality and distribution inefficiency arising from human error. Automation, the beginning phase of smartisation, must be accompanied by the implementation of automatic information collection of various production information.

- Infrastructure: The core technology to realise smartyards, infrastructure, including ICT and Internet of Things(IoT), is the necessary foundation for link and intelligence smartisation.

Figure 2 is an example of a Korean shipyard model with smartyard technologies.

(1) Domestic and global industry trends
① Japan
The Japanese marine sector is in all its stages, including design, production and ship operation, in the process of expediting digitalisation to achieve its goals of improving productivity, vessel safety, and upgraded crew working conditions.

- Mitsui Shipbuilding(Mitsui E&S Holdings Co. Ltd.), in cooperation with the Japan Ship Technology Research Association, is in the process of developing a system to analyse videos of worker behaviour. The ship manufacturing system aims to reduce labour hours by up to 40% through analysis of worker progress and efficiency.

- Tsuneishi Shipbuilding is looking into improving painter’s skills through the use of virtual reality(VR)(simulated paint works with a big screen, 3D glasses and VR). The VR system will reduce painting costs by KRW 6–7 million(USD 600,000 – 700,000) per bulk carrier.

- Fujitsu Shipbuilding is in the process of developing a system using augmented reality (AR) to assist in the construction of oil tankers. The system will allow any smartphone or tablet camera to indicate the positioning and order of installation of a ship’s pipes. Successful AR technology application would decrease installation time by 10%.

- Investigate and consider the effects on the environment, health and safety of each prototype’s productivity and the shipyard’s construction process

- Give recommendations and best practice examples for business models 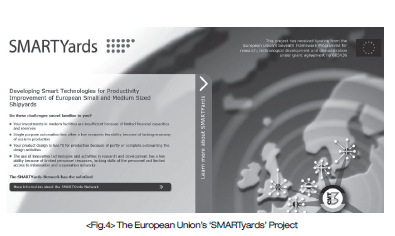 ③ China
In 2017, China’s Ministry of Industry and Information Technology released a manufacturing and internet cooperative development pilot project list. One such project is Zhongyuan Shipping’s shipyard, which was selected for a pilot project for the integration of Westernised smartship construction, becoming the first of its kind in China’s shipbuilding industry. The project’s application of an automated/intelligent production line, oil tanker-focused smartship construction, continuous development towards smart factory construction, to name a few, set an example for the possibilities of smart shipyard’s in China.
Furthermore, arising from intelligent ship construction, productivity will increase approximately 70%, and the number of faulty goods will decrease to improve the working environment and reduce labour intensity, in turn, decreasing wage costs, ultimately establishing ‘smart’ness.
Also, autonomous production increased productivity by 15%. The China Shipbuilding Industry Cooperation(CSIC) was able to create a new paradigm through its factories and cooperation to establish China’s first intelligent and autonomous factory. It is now a prime example of smart ship construction to assist China’s shipbuilding industry’s smart upgrade. 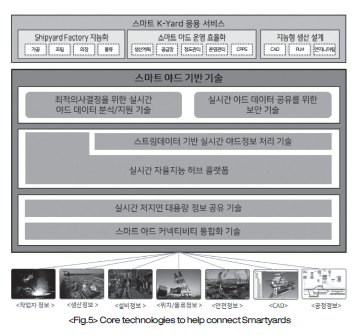 - Automated construction
∙ Europe’s shipbuilders do not store structural steel. Instead, all pre-processing is outsourced and made to arrive on-site just-in-time, ready for immediate use.
∙ China established the first autonomous smart ship factory. It now acts as an example to the shipbuilding industry for its innovative smart ship manufacturing.

- Smartyard operation efficiency
∙ Germany has many industry-leading companies in the traditional production management systems sector. However, along with these companies, research institutes, agencies and experts are developing cyber-physical production systems(CPPS) and industrial internet of things(IIoT) to realise smart factories.

- Smartyard-centric technology
∙ Germany’s cruise industry has integrated IoT, AI and VR technologies, with the use of wearables, to its services to provide each passenger with a personalised and revolutionised user experience.
∙ Japan is developing a system which uses radio-frequency identification(RFID) tag-integrated equipment and tools to monitor work progress through its on-site cameras to reduce work time by up to 40%. Furthermore, efforts are being made to develop VR imagery system which displays the ship onto a big screen with which the worker can paint using 3D glasses. Also, developments are being made towards pipe installation systems using AR technology. 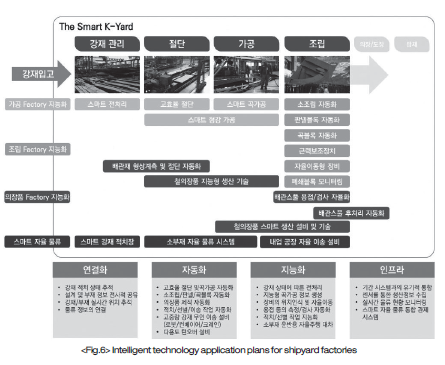 ② Korea’s technology trends
- Smartyard-centric technology
The Korean government and various companies are taking confident strides towards introducing smartyard-centric technologies.
Korea’s major ICT companies and the shipbuilding industry are collecting and providing all necessary real-time data, big data analysis, and introducing infographic support platforms to apply on various areas. Korea is also in the process of introducing AI-based interface technology to interact with the user, support information collection and service provision. Although Korea’s interests in AI and big data is growing, its technological expertise falls behind that of its competitors.

- Automated construction
The efficiency of Korea’s shipyards steel plate transfer technology is almost like that of other world-class systems. However, with the current state of technology, differentiation is not possible from a noticeable lack of speed and quality. As a result, innovative technological development is required.
Korea’s hull plate production technology can be considered world-class; however, as it is heavily reliant on manual labour, it is not yet up to smartyard standards. Steel beams are produced by either by shipyards or outsourced to specialist producers. On the one hand, automated T-bar production is possible, but steel beam production is limited to mechanised production.
In Korea, assembly is centred around large shipyards with R&D capable of developing their technology. Partially automated equipment has been designed, but further technological improvements still need to be made to achieve full automation, especially for equipment to recognise parts. Fitting manufacturing is often outsourced, which makes it challenging to possess R&D-capable workers. Also, not only is manufacturing, plating and painting completed separately but also due to environmental issues, the companies are geographically spread apart, causing severe logistical inefficiencies.
Goods used by Korea’s shipyards are generally bulky and large; in turn, they are reliant on transporters and cranes instead of robots. Also, as the majority of decisions are made on-site with tacit knowledge, much reform is necessary before smartyards can be established in Korea.

- Production design system
Despite efforts for upgraded production design made by employees of Korea’s large shipyards, they are still having to use imported CAD software incurring significant licensing fees and continuously relying on imported technology. 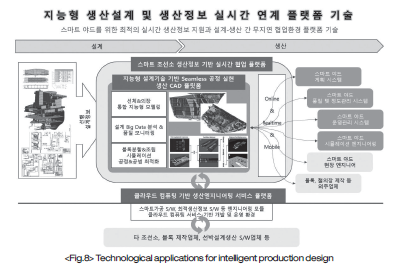 (1) Investments required in smart shipbuilding production technology
Until now, R&D support for the shipbuilding industry has been focused only on certain sectors. Government-led R&D support for middle-sized shipyards has been insufficient.
Over 90% of the government’s initiatives for the shipbuilding and marine-related industries has been focused on shipbuilding and equipment planning technology. Since 2010, from the 406 initiatives, only 29 (approximately 7%) have been towards production automation, enhanced efficiency and related areas. Of the initiatives, 208 (51%) have targeted middle-sized firms, focusing on the commercialisation of standardised parts development. With regards to production technology, it has been challenging to secure innovative technological progress as it has limited by small and medium-sized shipyard’s efforts.
Korea’s competitors, China and Japan, have already begun looking into the smartisation of the ship construction process. Korea also urgently needs to secure smart technologies. Korea has come to a point where, based on recently acquired capabilities of Korea’s large shipyards, small and medium-sized shipyards also need to begin smart, ship production. 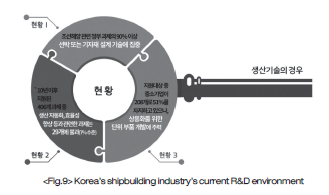 (1) Smartyards are the key competitive advantage for the future shipbuilding industry
In the shipbuilding industry where cost reduction and enhanced productivity is vital, where the need to surpass mechanisation and automation for linkage, intelligence and automation is necessary, competition amongst countries in pursuit for securing smartisation is fierce.
If efforts to surpass the experiences of skilled employees for further skills development, supported by the Fourth Industrial Revolution’s core technologies, fail to bring about innovative changes to smart ship construction, the shipbuilding industry’s current struggles in price competitiveness will become exacerbated.