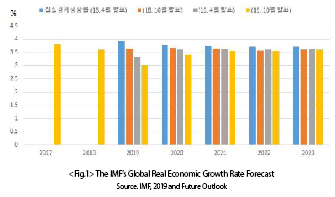 I. Industrial Environment and Macroeconomics

1. The Global Economy and Trade
(1) In 2019, the global economic growth rate decreased. Improvements can be expected in 2020(International Monetary Fund(IMF)’s forecast in October 2019)
In October 2019, through the ‘World Economic Outlook’ report, the IMF estimated the global economic growth rate in 2019 to be 3.01%. However, the IMF is expecting improvements in 2020 with a growth rate of 3.41% driven by growth in developing countries such as India.
The 2019 global growth rate, relative to 2018 expectations of 3.65%, had slowed considerably following the onset of the ‘U.S.-China Trade War’(Trade War from here on in) and its consequences as well as a general economic slowdown in developed economies. Short-term growth forecasts for 2021 have also been revised down three times. Economic growth forecasts for 2020 were 3.76% in April 2018, 3.66% in October 2018, 3.61% in April 2019, and 3.41% in October 2019.

(2) In 2019, merchandise trade growth slowed significantly. Improvements are expected in 2020
In the IMF’s report, the 2019 global merchandise trade growth rate was estimated to be 0.89%, the lowest recorded level since the Global Financial Crisis in 2009. The rate highlights the severity of the Trade War’s and its effects.
The merchandise trade growth rate is expected to increase to 3.34% in 2020. However, this rate is a significant decrease from past forecasts of 4.37% in April 2018, 4.14% in October 2018, 3.87% in April 2019, and 3.34% in October 2019.
The key to future trade growth lies in resolving trade disputes between economic powers. If the situation does not improve, then the 3% trade growth rate forecast could potentially be further revised down. In 2019, demand for shipping has, to date, been considerably weak; however, it is expected to improve in 2020. Despite the IMF’s forecast, demand will likely not be able to achieve the same levels of 2017 nor 2018. 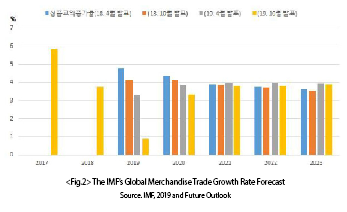 2. Oil Price and Fuel Price Trends
(1) Oil prices are showing signs of stability in Q3
Following a fall in global oil prices in the latter half of April, prices have stabilised beginning Q3.
In September, following the bombing of a Saudi oil facility, oil prices rose to reflect the market’s uncertainty; however, its effects were short-lived. In September, the average monthly price for West Texas Instrument(WTI) rose 4.1% month-on-month(MoM) to $56.97 per barrel. Brent Crude and Dubai rose 1.2% to $62.29 per barrel and 1.1% to $61.13 per barrel, respectively. 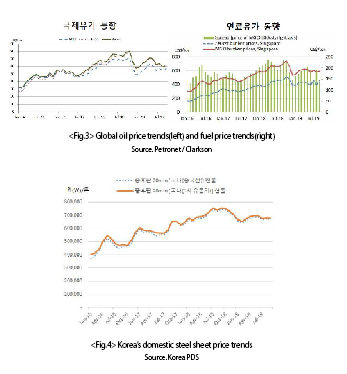 1. The Bulk Carrier Market
(1) The Q3 bulk carrier market condition is at its best since 2011
The average Baltic Dry Index(BDI) for Q3 was 2,030, up 23% from Q3 2018. 2019’s quarterly average is the highest since 2011 when excess ship volume was created from a booming shipbuilding industry.
The culmination of impacts from a Brazilian dam collapse in January, which was only recovered in April and the mass reconstruction of scrubbers in Q3, with the beginning of the Northern hemisphere grain season, caused freight rates to rise sharply due to decreased supply of transporters. However, the fundamental improvement in the shipping market as a result of the impacts of instances such as mass scrubber reconstructions is difficult to see as shipping demand has decreased sharply from the consequences of the Trade War. 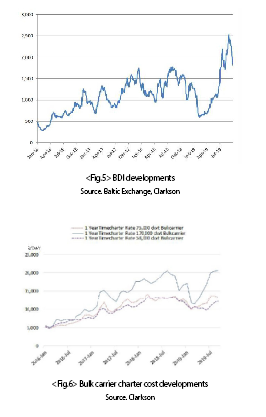 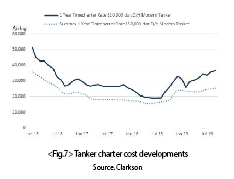 (3) The effects of the bulk carrier market supply contraction in 2020 to lead to improvements
A sharp decrease in demand for bulk carriers in 2020 is expected. The effects of the International Maritime Organization(IMO) 2020’s reforms such as recycling old ships and scrubber reconstruction will continuously decrease supply. The IMF’s economic forecast for 2020 expects to see the economic growth rate and merchandise trade rate also undergo reforms. However, underlying uncertainty from the Trade War will limit the reformative effects.
Sulphur Oxide Regulations will come into effect in January 2020, but a six-month grace period is expected. Afterwards, the number of disposed ships is likely to increase due to a surge in fuel costs, and the number of inactive ships undergoing scrubber reconstruction is also expected to increase. Accordingly, the market is expected to improve, and if the Trade War is resolved, further market improvements can be expected. 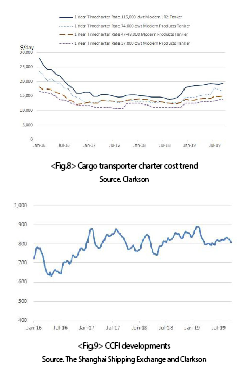 (3) The market condition for tankers will likely improve relative to other markets in 2020
The tanker market, like others, will also experience shortages due to the implementation of the Sulphur Oxide Regulation, which will require the recycling of old ships or the reconstruction of scrubbers. Furthermore, as a vast majority of ordered ships have now been delivered, demand for new ships is also unlikely for the meantime.
Also arising from the effects of IMO 2020, the demand for low sulphur oil has increased significantly. In turn, petroleum products exports from East Asia, which are well equipped with advanced facilities, and demand for oil, in general, is expected to increase. Unlike in other markets, East Asian markets are experiencing a steady increase in demand. Despite a low increase in demand, the increase in the tanker market is still greater than that other markets.

3. The Container Ship Market
(1) The container ship market has drastically contracted in Q3 2019 compared to Q3 2018
The average China Containerized Freight Index(CCFI) for Q3 2019 was 821.6, down 1.7% Q3 2018. The consequences of the Trade War have limited the market's growth to below 3% seriously slowing the market's growth. 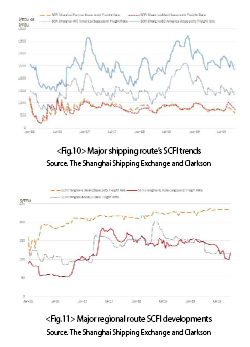 (4) The Container Ship Market is expected to improve modestly in 2020
Demand for container shipping in 2020 is expected to increase at a modest pace despite variables such as the Trade War. According to the IMF’s economic outlook, it is expected that trade volume will increase in 2020. Unless uncertainty arising from the Trade War is resolved, container shipping demand growth is expected to reach only 2%.
On the other hand, as shipping companies compete to launch bigger ships, the pace of TEU expansion will slightly outpace demand growth. However, as the majority of container ships were launched within the past ten years, there will be minimal effect on the market arising from ship recycling regulations. But, as 3,000 – 8,000TEU-class mid-size ships continuously exit the market, their absence will lead to supply adjustments.
In spite of stagnant demand and increased supply of ships, scrubber reconstruction and fuel cost-saving and pollutant-reducing operations will indefinitely cause cuts to supply. As such, modest improvements to the overall industry can be expected. However, the mitigation of uncertainty arising from the Trade War and the trade market will help to realise the IMF’s forecasted trade growth prospects which will help to expedite improvements to the overall market. 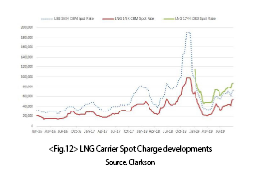 1. Cumulative demand for new ship orders in Q3 declined YoY
In Q3, orders for new LNG carriers were more active than usual, but market stagnation continued as bulk carriers, tankers, and container ships shrank leading up to the implementation of the Sulphur Oxide Regulation in 2020.
The cumulative global order volume, up to and inclusive of Q3, was down 42.9% Year-on-Year (YoY) to 1,539 million Compensated Gross Tonnage(CGT). Order volume for Q3 was also down 63.1% YoY to 333 million CGT.
The cumulative launch value was also down 31.7% YoY to $419.3 billion, and in Q3, the launch value was down 60.8% YoY to $88.1 billion.
In Q3, the global cumulative new ship construction volume was up 2.9% YoY to 2,522 million CGT. The global construction volume reached its lowest in 2018 due to weak demand in 2016; however, improved slightly in 2019 from increased order volume in 2017. 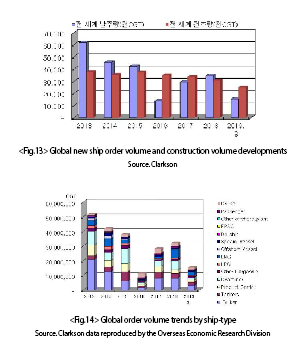 2. Order volume for all ship-types, except for LPG carriers, have decreased
In Q3, the cumulative LPG carrier order volume was 670,000 CGT, a 25.7% increase YoY; however, the absolute quantity itself is significantly small. Order volume for other ship-types have also contracted significantly YoY in Q3: bulk carriers down 46%, tankers down 20.7%, merchandise carriers down 8%, and container ships down 76.6%.
In 2018, LNG carriers’ order volume contributed significantly to the recovery of Korea’s order volume with 39 vessels equating to 2.81 million CGT. These levels are an improvement compared to the previous year, but down 28.7% compared to the same period in 2017. Also, as large-scale projects in countries such as Qatar are delayed until 2020, the order volume for the LNG carrier market has fallen short of expectations.
On the other hand, order volume for cruise ships is also down 21.6% on the same period last year.

3. Clarkson’s New Shipbuilding Price Index by ship-type drops in Q3
Clarkson’s New Shipbuilding Price Index was down 0.7% in Q3 to fall to 129.92 in September. Tanker and gas carrier both maintained 154.85 and 131.61, respectively. But container carriers were down 2% from Q2 to fall to 79.81. Bulk carriers were also down 0.7% in September to 129.49.
Demand in the new ship market is down, and as the price of steel sheets also fall, shipbuilders are expected to drop their prices also. 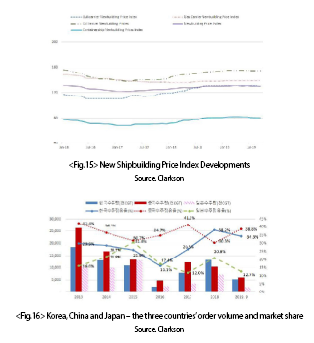 2. Order volume for all ship-types, except for Liquified Petroleum Gas (LPG) carriers, have decreased
In Q3, LPG carrier order volume was up 68.2% YoY to 420,000CGT, the only ship-type with increasing demand. All flagship vessels of Korean shipbuilders showed sluggish patterns: container ships down 93.6%, tankers down 28.5%, cargo transporters down 28%.
28 LNG carriers were ordered in Q3 making up for 46% of all ships ordered. However, orders were down 36.4% the same quarter YoY.
According to CGT, LNG carriers and tankers accounted for 85% of all orders, an over-reliance on the two types. 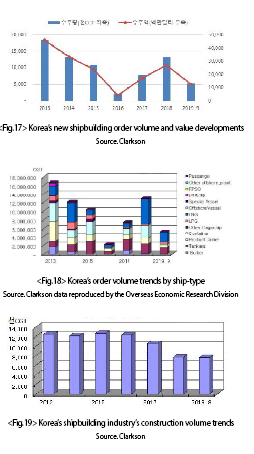 1. New ship order volume demand set to improve after H2 2020
Shipowners’ interests are growing ahead of the implementation of the Sulphur Oxide Regulations in January 2020. Their interests are expected to last six months into the year. Shipbuilding demand is expected to improve gradually towards H2 as owners are able to observe the effects of the regulation throughout H1.
During H1 2020, the number of LNG carriers is expected to increase as large-scale LNG projects put on hold in 2019 are continued and completed. And so, the 2020 global new ship market conditions are expected to improve with global order volume set to increase 26% to 3,150 million CGT.
Global order value is also set to increase in 2020 by 28% to approximately $77 billion. 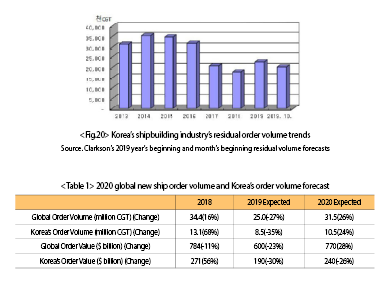 2. Korea’s shipbuilding industry’s order volume also set to improve in 2020
Korea’s shipbuilders can expect large-scale LNG carrier order volumes during H1 2020, but orders for other ship-types will likely be weak. Demand will likely slow during H2 2020, but total order volume will still probably be up 24% in 2020 YoY to a total of 1,050 million CGT.
As orders for LNG carriers subside in H2, orders for tankers and other major ship-types will possibly show signs of improvement. During 2020, as small-to-medium LNG-related marine equipment and infrastructure such as FPSO and FSRU are ordered, approximately $2.5 billion worth of marine plants will be ordered.
In 2020, the order value will be up 26% YoY to approximately $24 billion.