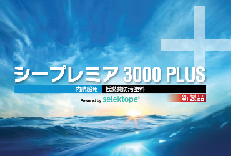 A new antifouling coating containing the barnacle-repellent active agent Selektope® has been introduced to the market by Chugoku Marine Paints(CMP). SEA PREMIER 3000 PLUS is the eighth product developed by CMP that contains Selektope®, demonstrating the Japanese paint manufacturer’s growing commitment to the technology.
SEA PREMIER 3000 PLUS is a self-polishing coating based on silyl polymer technology. It delivers excellent slime and algal resistance with the combined power of Selektope® and cuprous oxide for superior hard fouling prevention. Developed initially for use in the Japanese domestic market by coastal vessels, SEA PREMIER 3000 PLUS is particularly suitable for vessels operating with a low activity rate or at low speed. The coating is also suitable for use in niche areas, such as sea chests and interior-grating-bow thruster tunnels.
“The increasing range of Selektope®-containing products introduced to the market by our largest customer further demonstrates our technology’s vital contribution to enhancing the performance and differentiation of antifouling coatings. Expanding the range of Selektope®-containing products in the world’s third largest market* for marine coatings will contribute to continued long-term growth for I-Tech,” says Philip Chaabane, CEO, I-Tech AB(PUBL).