(1) Classification of Main Equipment for LNG Carrier
Typically, the primary apparatuses that comprise shipping are cargo hold, cargo handling device, mechanical equipment, electronic equipment, and fittings. This study focuses on equipment that are specialized for LNG carriers. Cargo handling devices are made specifically to treat LNG carriers, and therefore much more specialized than equipment for regular merchant vessels. In fact, a select number of core electrical and electronic equipment are mounted to fulfill specialized functions that are unique to LNG carriers. Mechanical equipment includes components such as engine to propel the ship, generator to produce electrical energy, and heat exchanger. Multiple systems that are actively utilizing the gas that produced during vaporization are also mounted in LNG cargo hold. Fittings are used not only to equip LNG carriers but also various other regular vessels.

(2) Corporations that Supply Core LNG Carrier Equipment
For Cargo hold, securing a select number of alloy steel, insulator, and surrounding mechanical components are reliant on importation. Posco, Finetec, Hankuk Carbon, Unitech, and SJM are domestic Korean corporations and NSSC, UACJ, (Metsä Wood), and SFZ are foreign corporations that produce these apparatuses.
Cargo hold and insulator are manufactured after securing necessary materials that are highly specialized. As a result, material is a pivotal component of the overall discussion and companies that source the material are a part of the analysis.
Core equipment and parts to build cargo handling devices are also often imported. Specifically, the primary pump is solely imported from abroad from companies Shinko and Ebara. Additional primary manufacturers for cargo equipment that are foreign are Alfa Labal, AtlasCopco, Cyrostar, Kongsberg, Nakakita, Fukui Seisakusho. Seah Steel, Dongwha, Kang Lim, Finetech, Sunbo Industries, Pkvalve, HanlaIMS are Korean domestic suppliers.
It is postulated that while primary systems such main and auxiliary engines are produced domestically ever since the original technologies were licensed, there is a great reliance on importation of pumps and electric propulsion systems. Hyundai Heavy Industries, HSD Engine, STX Engine are the primary producers of engine and Hyundai Electric, Hyosung, DongHwa Entec, and Oriental Precision & Eng are primary corporations that create other miscellaneous machinery. The primary foreign suppliers of pumps and electric propulsion systems are Shinko, Teikoku, ABB, and Siemens.
For Electric and Electrical Equipment, communication and navigation devices are predominantly reliant on European and Japanese corporations. Excluding a select number of few items, Honeywell, Kongsberg, JRC, Furuno, STN, Atlas are all foreign corporations are leading producers of IAS, sailing equipment, and communication equipment. MRC, SNSYS, Hyunjin, LS Cable & System, Hyundai Electric are primary Electric and Electrical Equipment producers in Korea.
Most fittings are produced by domestic producers in Korea. Dusan Heavy Industries & Construction, Flutek, Yoowon, HipressKorea, Lotte Fine Chemical, HiairKorea, Hyundai Elevator, and Oriental Precision & Eng are the leading corporations in the field. 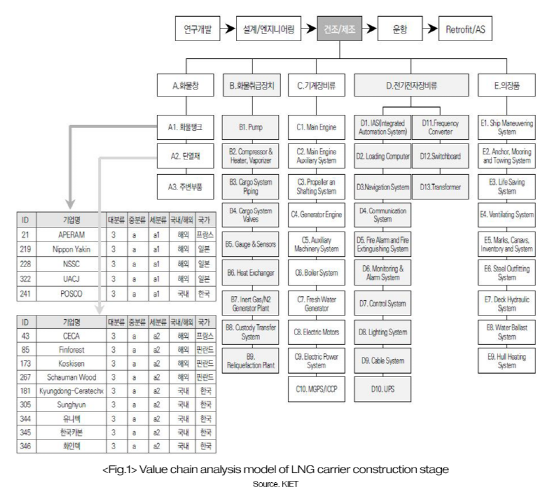 (3) Model Analysis of LNG Carrier Value Chain
① Production Stage
In order to conduct a supply chain analysis of the construction of LNG Carriers, this study gathered information about the corporations that source the necessary material and produce various equipment. Especially in the case for LNG carriers, criteria such as growth analysis, demand stability, supply competitiveness, innovation were selected after gathering data from Kis-value, KED date, DART and foreign DB. These categories were then verified by experts of the corresponding fields and are used to analyze the domestic and foreign producers that manufacture 44 types of subcategories(a1~e9). The categorization of the 44 types and their suppliers are beneficial to identify which types of materials and equipment are heavily reliant on foreign suppliers by assessing the current state of production on a domestic level. Based on this information, the study deduces factors that contribute to the current stagnation of domestic production and identifies different ways to precipitate domestic production of these parts. 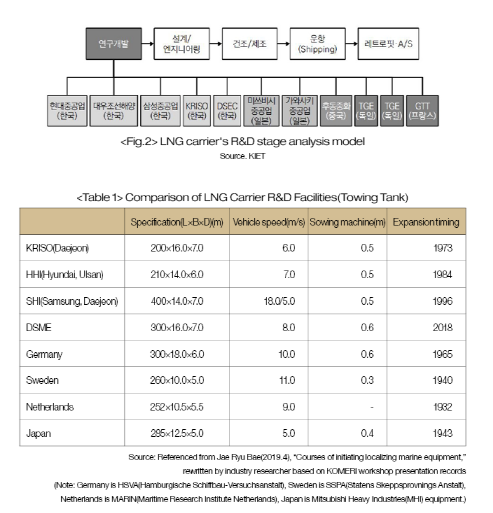 ② The Research and Development Stage
In the research and development stage, the study focused on corporations that have their own R&D systems such as Hyundai Heavy Industries, DSME, Samsung Heavy Industries, KRISO, DSEC in Korea, Mitsubishi Heavy Industries, Kawasaki Heavy Industries, JMU in Japan, Hudong-Zhonghua Shipbuilding in China, TGE, a gas engineering and R&D corporation in Germany, and GTT, a French corporation with core technology. Because the study solely focuses on LNG carriers, only the three domestic top corporations that are leading in commercialization were selected. In addition, corporations with core technology were analyzed while R&D that are specific to each equipment were not factored into the study.
The R&D facilities of the top three domestic corporations were equal or better(due to newer technologies) than the R&D of corporations from leading nations such as Germany, Sweden, the Netherlands, and Japan.
In terms of Sloshing, a primary facility related to LNG, the expansion rate of sloshing facilities and its new technologies of DSME appear to be on the same level as GTT, which owns the core technology for NG cargo hold.
LNG Carriers are steadily changing since their conception in 1969. The first vessel was steam turbine based, and steady R&D efforts transformed the ship. In 2004, dual fuel engine was introduced. This was followed by tri-fuel engine technology in 2008, which transformed to two-stroke engines such as MEGI, S-DF in 2016. 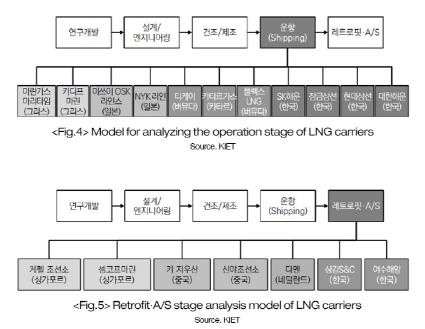 ④ Sailing Stage
For the sailing stage, instead of analyzing primary consumers that are primarily global shipping companies such as Maran Gas Maritime, Cardiff Marine, Mitsui O.S.K Lines, NYK, Teekay, Quatargas, and Flex LNG, the study analyzes HMM, SK Shipping Co., and Korea Line. Instead of focusing on shipowners that already possess LNG carriers, the study centers around carriers in order to measure the competitiveness of sailing.
⑤ Retrofit and A/S Stage
For the Retrofit and A/S Stage, Keppel and Sembcorp marine shipyards from Singapore, Xinya Shipyard in China, Samgang S&C, Yeosu Ocean in Korea are analyzed. It is postulated that due to the short amount of time of operation, repair equipment is not optimized for mid-to large sized vessels as well as high-value vessels in Korean corporations such as Yeosu Ocean and Samgang. As a result, their competitiveness in the field are relatively low.

3. A Check of Value Chain Level Competitiveness in Comparison to Trade Rival Nations

In Value Chains for LNG carriers, the market for design/planning/construction stages are established based on manufacturers and the volume of contracts that are being awarded to them. The market for related materials, parts, and A/S are in sync with the market for LNG carriers. Due to the outstanding competitiveness and superiority of the Korean domestic market in the design/planning/construction stages in the global market, it is unnecessary to compare it with its competitors around the world. On the other hand, from the demand(for shipping companies) perspective, it is still reliant on global energy shipping. Furthermore, the A/S category, Korea virtually has no base and as a result, a comparison does not bear any notable significance. Despite these facts, in order for an objective comparison, necessarily index analyses were conducted based on statistical data. However, because the design/planning/construction and the related markets and demands(shipping) and A/S(Fixing and remodeling) were discussed in relation to the global value chain of LNG carriers and markets, they were excluded from this chapter. In addendum, however, the study includes a qualitative analysis that includes expert opinions of the core materials and equipment that comprise LNG Carriers.

(1) Growth Trend
The growth trend of the design/planning/construction/demand(for shipping companies)/AS categories can be substituted by the LNG carrier market. In addition, the markets for primary material and equipment during the shipbuilding stage also parallel the LNG carrier market. Based on this, the growth trend of LNG carrier is almost identical to the aforementioned factors such as shipping contracts and construction and the surrounding trends.
Based on combining the forecast data and self-estimating results of the future demand side growth and analyzing them based on average performance, CGT and price, the demand in 2030 will rise 5.7~7.1% in average on a yearly basis. This is based on the average performance between years 2010~2018. Given the fact that the overall demand for vessels is rising approximately 2.9% annually, LNG carriers and their value chain market demand will grow on a rate twice or higher compared to the overall market. 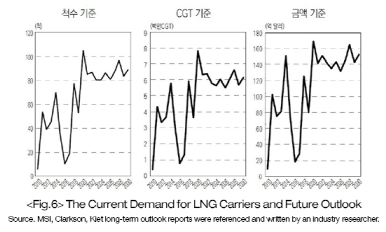 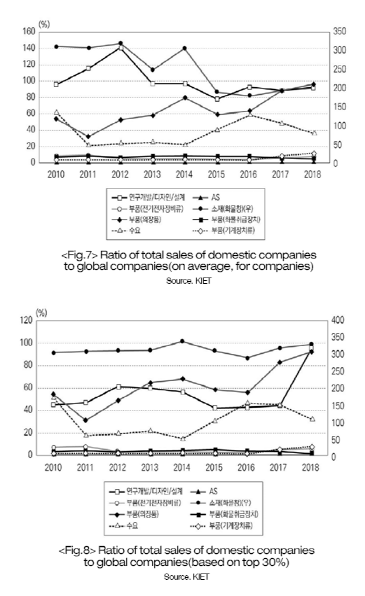 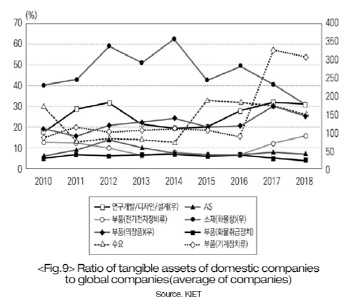 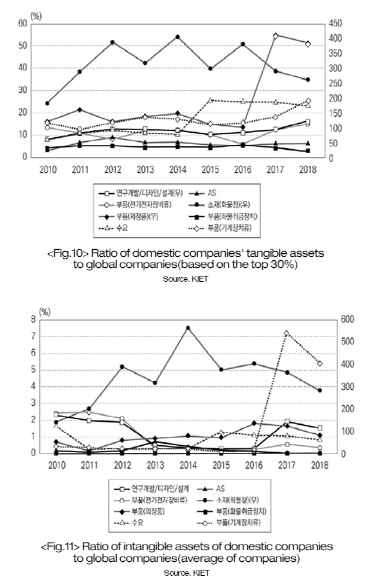 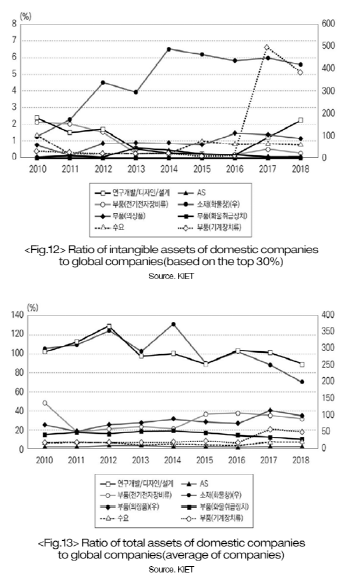 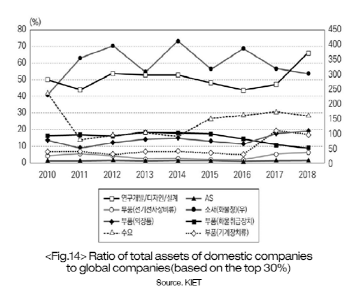 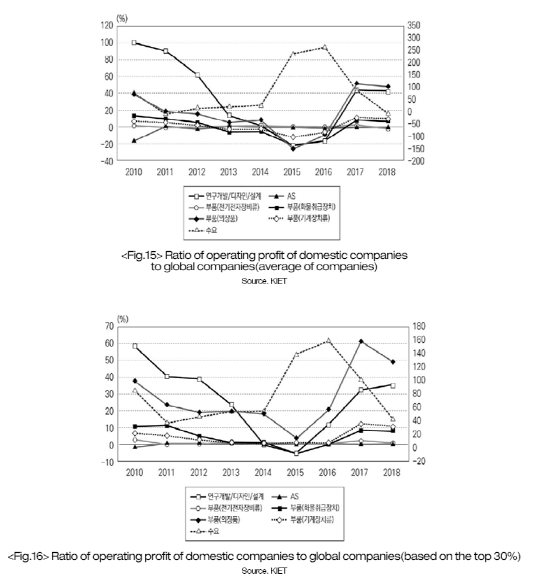 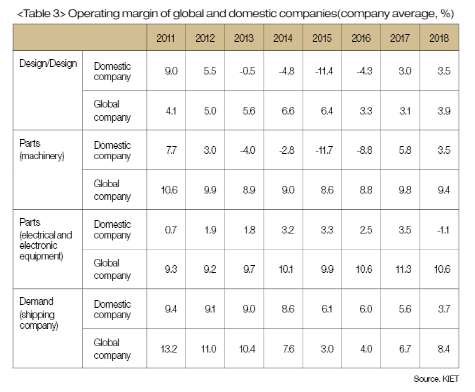