(1) Improving competitiveness
A company’s competitiveness is visible during an economic downturn than during a boom. During a boom, even less competitive shipbuilders receive orders as demand overflows. However, during a downturn, orders are only placed with competitive shipbuilders.
Competitiveness in the form of technological competitiveness is important, but during difficult times, price competitiveness takes precedence. This means that technological competitiveness is a means to achieving price competitiveness which translates into a high order volume. And by achieving a consistent construction volume, costs can be kept relatively low, and technology can be accumulated to create a healthy business cycle.
Upon examining the global market outlook, it can be established that the market demand recovery will be slow. Low ship costs are also expected in the future. In turn, strategic cost competitiveness needs to be established. However, upon examining the global shipbuilding market, technological capacity requires further strengthening. Also, as global environmental protection regulations are periodically reinforced, ship owners are turning towards smart ships for its increased safety, and labour and cost-effectiveness by reducing crew numbers. In response to the environmental protection regulations, further technological development needs to be secured to construct environmentally friendly ships. Smart ship and autonomous navigation technologies need to be continuously developed and implemented to help ship owners and shipping companies reduce costs and improve safety. 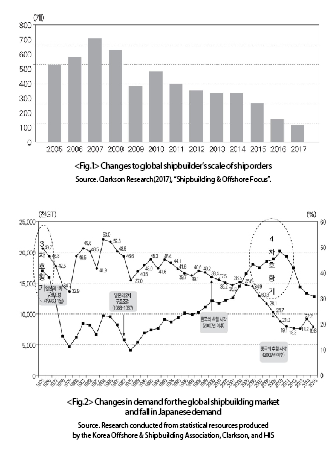 (2) Variability risk actions
The global shipbuilding market vulnerable to large middle- to long-term market fluctuations. In response, it is recommended that export-oriented shipbuilders prepare contingency plans for global market fluctuations. If large-scale investments are made to shipbuilding facilities, builders should understand whether the market will improve in the middle- to long-term. If investments are made through loans from financial institutions, both the institution and the shipbuilder should closely examine loan repayments as well as cash flows.
Since 1900, the global shipbuilding industry experienced four major cycles. However, as the global market continues to grow, market fluctuations are growing more severe. As demand grows, companies seek-out investment opportunities in response to the booming market. However, undertaking investments during flat market conditions can potentially expose shipbuilders to unnecessary risk as the results of investments in the shipbuilding industry are only realised in the long run. The fact that the global market is booming suggests that speculative demand has already been added. This means that investments have the potential to create a market surplus leading to possible investment failures.
Investments to expand construction capacity should proactively understand the flow of target markets such as domestic demand and exports. In the case of export markets, a conservative, forward-looking approach is necessary. Korea’s shipbuilder, which experienced that third super boom of the 1970s and ensuing downturn made investments aimed at the next boom by estimating the replacement period of ships built during the previous boom. As such, shipbuilders were well-prepared to enjoy the global boom during the mid-2000s. 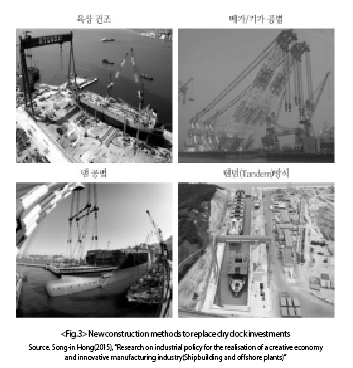 However, many small- to mid-sized shipbuilders who made investments during market growth ultimately failed to recover investments. In turn, they were sold or declared bankruptcy, and, to this day, some are still undergoing restructuring. Furthermore, beginning in the mid-2000s, financial institutions were forced to sell financial derivatives such as KIKO, which negatively affected shipbuilders leading to their market exit. As a result, small- to mid-sized shipbuilders capable of constructing 10,000-20,000 ton-class ships were forced to exit the market, leading to a rapid decline of the Korean shipbuilding market.
On the other hand, following the market boom of the 1970s and 20 consequential years stagnant growth, large shipbuilders underwent conservative facility expansions in the 2000s. In order to mitigate the burden of fixed equipment, shipbuilders opted to either expand parts of existing docks or utilise floating docks instead of constructing new dry docks. Although this approach was costly in the short-term, the mid- to long-term benefits were far greater. Shipbuilders also utilised the outsourcing of Mega and Giga blocks, SKID construction, and underwater welding for dam constructions.
Doctor Paul Stott of the University of Newcastle emphasised the need for the flexibility of fixed assets and human assets in preparation for market fluctuations. For example, Korea’s shipbuilder’s utilisation of floating docks strengthened temporary fixed asset levels and overcame the limitations of human assets through outsourcing.
Looking into the future, it is difficult to expect a large-scale boom. As such, an immediate response is not expected. However, if the market were to change in favour of smart, environmentally-friendly ships, Korea’s shipbuilding market may be able to recoup its losses made in the bulk carrier, the small-to mid-sized oil tanker, and container ship markets. Such recovery for Korea’s builders would be made possible due increased to orders for LNG-propelled vessels, an area which Korea has a high technological advantage. The outlook of this study is based on the assumption that current market share is maintained; however, a sudden change in the structure of the market towards smart ships could change the current market share in Korea’s favour.
Meanwhile, orders for large ships and high-tech ships, centred around large shipbuilders, are highly likely to be exposed to market volatility. Aside from Korea’s strengths in the oil tanker market such as Panamax-class ships and chemical tankers which have relatively low exposure to market volatility, other large ship classes have exposed to relatively high levels of market volatility. Overall, market volatility by ship type, which was high due to the pre-GFC boom, fell post-GFC. However, high levels of volatility remain for ultra-large container ships, LNG carriers and bulk carriers. On the other hand, handy-class oil tankers, handy-class bulk carriers, and feeder-class container ships have remained relatively stable. Therefore, it is necessary to consider the relative volatility of the construction volume forecasts for Korea’s shipbuilding industry. 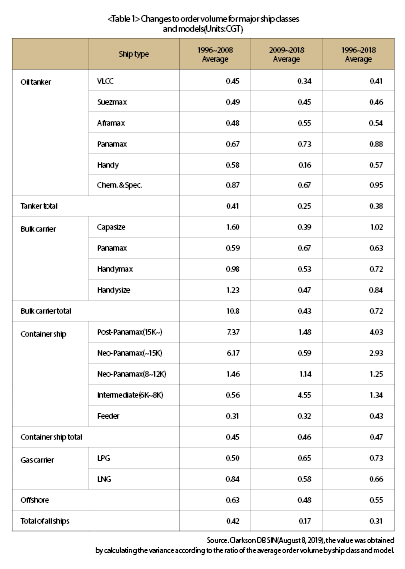 (1) Building a robust ecosystem tailored to an appropriate scale
In order to establish and apply a mid- to long-term vision and development plan for the shipbuilding industry, ecosystems for equipment’s, small- and mid-sized shipbuilding, design and engineering, and shipping must be steadfast and supported by sector-specific policy. Since the GFC, most small- and mid-sized shipbuilders have undergone restructuring. At the same time, following the sharp fall in global oil prices and underperforming offshore business, large shipbuilders have begun to make intensive self-reliance efforts resulting in a weakening of Korea’s domestic shipbuilding ecosystem. Directly related ecosystems of the shipbuilding industry such as equipment, design, and engineering have also been restructured to maintain an appropriate size in line with the shipbuilding industry. However, current levels of stabilisation and the efficiency of operations are insufficient. In response, Korea’s shipbuilding industry is laying the foundation for a new leap forward as it pre-emptively responds to qualitative changes in the global market. Accordingly, the foundation for the development of a stable domestic small- and mid-sized shipbuilding, and shipping ecosystem is expected to be re-established. When Korea’s shipbuilding ecosystem is able to successfully maintain its competitiveness and continue to develop a healthy industry cycle, ecosystem-specific and industry-wide innovation will become possible.

(2) Establishing a mid- to long-term vision and development plan
Korea’s shipbuilding industry’s target market, the global shipbuilding market, is expected to have wide and deep volatility in the mid-to long-term. In order to minimise the aftereffects of the recession, efforts to reinforce industry-wide R&D aimed at future technology trends are necessary for a policy-centric vision and development plan which maintains the industry’s current scale and increased added value. It is necessary to calculate the size of Korea’s domestic shipbuilding industry relative to the prospects of ship class and model in the global market and Korea’s competitiveness which is reflected in a mid-to long-term vision. To realise this vision, policy measures such as the promotion of R&D, and the creation and application of policy financing should be actively employed to maintain and strengthen the capabilities and competitiveness of Korea’s shipbuilding industry.
Quantitative restructuring from mid- to long-term volatility can be minimised if appropriate construction levels are maintained, competitiveness is strengthened, value-added, and product structure is advanced.

(3) Regularisation of the mid-to long-term outlook and competitiveness analysis, and fostering long-term experts
The mid- to long-term outlook of the shipbuilding industry is integral to the establishment of industry-centric policy. Policy support is necessary so that the mid- and long-term outlook is not a one-off action plan, but a periodic support framework. In particular, it seems necessary to organise a ‘Mid-to Long-term Prospective Committee for the Shipbuilding Industry(tentative name)’ with the cooperation of participating organisation such as the shipbuilders, shipping companies, financiers, and associations who can cooperate to promote this work jointly. As previously mentioned, the outlook for the shipbuilding industry is ‘extremely inaccurate’, thus requires various and continuous studies to improve accuracy. Also, new analysis made from data available from various institutions is necessary to account for new technologies such and AI and Big Data.
Research and the fostering of experts should be promoted not only in the short-term but also into the long-term. Doctor Stott analysed that the 30-year market boom is due to two reasons. First, brakes do not work in the system even if a problem may occur due to the remaining order amount; and second, the cycle is too long, and experts are not present for the entire period.
It is necessary to account for the fact that Korea’s shipyards respond well during market booms, which is based on their experiences of past, long-term recessions. Also, the 30-year cycle is enough time for workers involved to retire. As Doctor Stott mentioned, when faced with a sharp recession, financial institutions dissolve ship finance divisions which gives rise to the issue of losing both competitiveness and experience. Shipbuilding-related companies face the same issue as employees familiar with the core plans and the work almost all retire after 30 years. Therefore, major stakeholders need to be prepared to retain and foster experts over the long term.