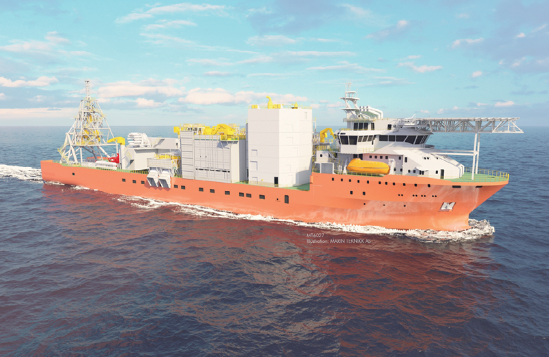 ABB wins contract from Damen Shipyards Group to deliver an advanced power system for the world’s first custom-built diamond recovery vessel
ABB will supply an integrated power system package that will ensure the world’s largest and most technologically advanced diamond recovery vessel meets exceptional safety, efficiency and availability requirements. The vessel is being built by Damen at Damen Shipyards Mangalia on the Black Sea in Romania. Financial details of the order were not disclosed.
With a total cost of $468 million, the vessel is the largest single investment ever made in the marine diamond industry. It deploys advanced subsea crawling – a technique for recovering diamonds from the seabed. The newbuild will be delivered to Debmarine Namibia, a joint venture between the Government of the Republic of Namibia and De Beers Group in 2022. De Beers Group is the world’s leading diamond company, with unrivalled expertise in the exploration, mining and marketing of rough diamonds, driving it forward since 1888.
Namibia has the richest known marine diamond deposits in the world, with Debmarine Namibia extracting some of the highest quality diamonds available anywhere from water of between 90-150 meters deep off the south west coast of the country. Traditionally, onshore along the coastline of Namibia, diamond mining is done in open-cast mines, however, with the land-based output in Namibia expected to run out in 15 years, offshore mining is on the rise.
The new 177-meter ship has been designed by renowned Norwegian naval architects Marin Teknikk. It will become the largest ship in the owner’s fleet, exceeding the size of Debmarine Namibia’s current largest vessel, the Mafuta, by 8,000 tons displacement (vessel weight based on the amount of water displaced by the hull). It is expected to increase the shipowner’s annual production by 35 percent, contributing additional 500,000 carats to today’s production levels.
The offshore mining specialist has previously installed ABB’s power systems on board the SS Nujoma(SSN), Debmarine Namibia’s deep-water diamond exploration and sampling vessel.