(1) The Korean Shipbuilding Industry's Market Share Outlook
The shipbuilding industry is cyclical; as a result, periodic demand trends are continually changing. From 2000 to 2018, Korea was the market leader by order volume, on a Compensated Gross Tonnage(CGT) basis, with a 30.9% share of the global shipbuilding and marine market, followed by China at 30.3%, and Japan at 21.3%. However, market share on a country basis fluctuates significantly over the examined period, as such, the period is divided into four periods to identify major contributing factors and strategies of major companies, as depicted in <Figure 1>. 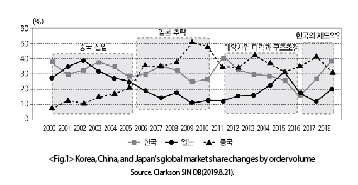 Period 2000 to 2005. During China's initial market entry, Korea's average market share was 33.3%, Japan's 30.6%, and China's 13.9%. This was the first time Korea overtook Japan to become the global market leader by shipbuilding order volume. However, China's entry began to gain traction as their presence increased from a 7.6% market share in 2000 to a 21.1% share by 2005. On the one hand, countries with overlapping construction with China, such as Japan, experienced market share dilution from 38.3% in 2002 to 24.9% in 2005 as China's construction volume grew.
Period 2006 to 2010. Japan's market share dived with China absorbing most losses - Korea's market share was 29.8%, Japan's 15.1%, and China's 41.2%. Despite the shipbuilding industry's apex in 2007, the market took a turn following the Global Financial Crisis(GFC) in 2008 and the Chinese government-led domestic demand expansion policies. As such, market share cannot be identified accurately.
Period 2011 to 2016. Following the oil price drop in 2014, Korea and China's marine industry were hit hard as the merchant ship market and the marine market entered into a recession. Japan's market share rose during this period from increased domestic demand, equipment investments and deferred shipbuilding industry expansions. The average market share for Korea was 28.9%, China 35.7%, and Japan 19.1%. Japan's market share increased following targeted domestic orders. Korea's marine industry experienced its lowest market share from 2015 to 2016 following large-scale inefficiencies and major shipbuilder-led restructuring.
Period 2017 to 2018. Order volumes slowly recuperated as the global economy began to recover. Especially during this period, Korea's shipbuilding industry was able to overcome restructuring uncertainties; as such, Korea's market share gradually returned to previous levels. Korea's average market share was 32.5%, China's 35.9%, and Japan's 16.2%. In 2018, Korea's market share overtook China to 38.5% off the back of growing deliveries of LNG carriers and Very Large Crude Carriers (VLCC). If the trend were to continue and strengthen through to 2020, Korea's market share is expected to be between 27-30%. China is expected to lead the market on an output volume basis. However, Korea will likely focus on the high value-added market with an emphasis on environmentally friendly Smart Ships as per the International Maritime Organisation's(IMO) strengthened environmental protection regulations.
Construction trends indicate competitiveness in the ship building industry. A ship's construction begins after an order is made; thus, it may seem irrelevant to competitiveness. However, given the rapid implementation of environmental protection regulations, orders will outpace construction. During this period, a company's backlog may be an ideal indicator of competitiveness. 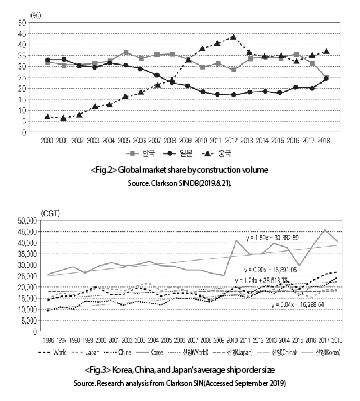 During the years of market contraction from 2010 to 2015, order volume and construction volume(2013-2018) comparisons show that Korea and Japan had excess construction volume. However, during the same period, China's order volume was 8% higher than its construction volume, which may indicate that either orders were not continued through to construction or were cancelled.
On the one hand, the average size of ships ordered in Korea was larger than that of its competitors. Following the GFC, Korea's small- and medium-sized companies, which usually constructed Handy Size vessels, restructured to cater to larger vessels, helping improve Korea's competitiveness. The growth of the average ship ordered in Korea was larger than the global average growth rate. In 2018, LNG carriers were ordered on a large scale with an average order size of 45million CGT. Upon comparing with Japan's average order size of 18.7million CGT and China's average order size of 23.7million CGT, Korea has a significant advantage in technologically advanced and large vessels.
Upon analysing the long-term trends of Korea's three major shipbuilders by ship type, the proportion of bulk carrier construction was considerably large until the 1990s as Korea was catching-up to Japan. After over-taking Japan, trends show that construction turned towards oil tankers, container ships, gas carriers, and marine plants. Shipping companies place orders for high value-added, large ships with select shipbuilders not for their cost competitiveness, but their quality.
Furthermore, on a per ship basis, except for bulk carriers, Korea's major shipbuilders increased its market share of all other ship types.
Korea's shipbuilding industry's competitiveness trend was also confirmed by a competitiveness analysis research conducted by the Industrial Bank of Korea in 2018. Korea was technology, production, and other(brand and after service) competitive; however, fell behind China and Japan in price competitiveness. As a result, Korea's competitiveness was limited to container ships, gas carriers, marine plants, and oil tankers. 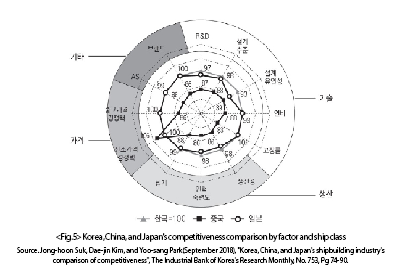 (2) Market Analysis of Major Ship Class and Models
In order to present a detailed market forecast of Korea's shipbuilding industry, the market share by ship model will be analysed. Forecasts by model are needed to account for the growing size of ships, in doing so, long-term ship changes to vessel shapes will help estimate the markets construction volume. For example, the size of oil tankers began to grow before the Oil Shocks of the 1970s, and the trend continued for Very Large Crude Carriers(VLCC), Suezmax, and Handysize ships even after the GFC. However, following the GFC, the size of Aframax and Panamax ships, on a DWT basis, began to decrease. After 2010, the number of VLCC's continued to rise, whereas, for Aframax and Panamax ships, numbers began to fall.
On a Gross Tonnage/Compensated Gross Tonnage basis, upon comparing ship types by average order volume, ships have gradually grown in size following the GFC. And after 2016, the number of Suezmax and VLCCs have increased. 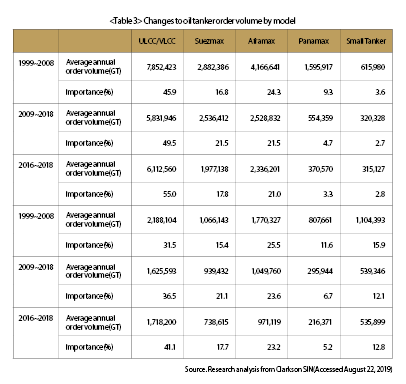 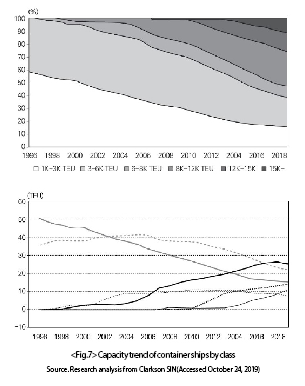 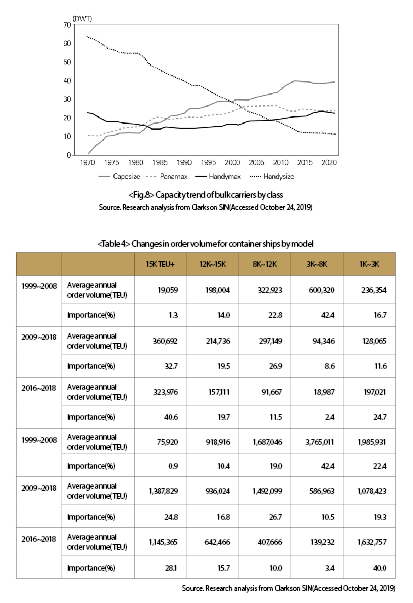 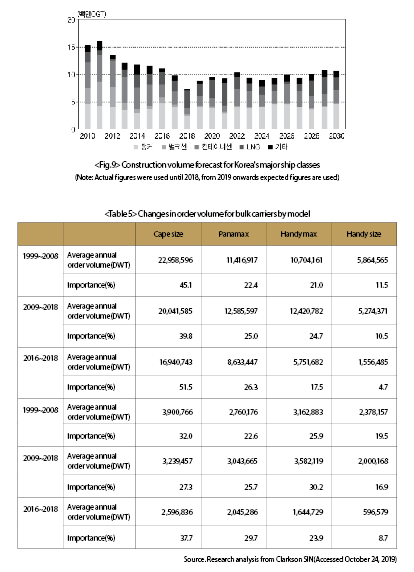 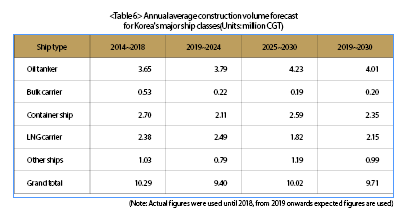