Trade volumes until 2020 are based on actual figures provided by Clarkson’s short-term material’s forecasts. And trade volumes until 2025 are based on Wood Mackenzie’s 2018 Q2 forecasts shown in <Fig.1>.
Wood Mackenzie’s demand volume forecasts from 2025 to 2030 assume a 2.68% annual LNG demand growth rate in line with the International Energy Agency’s(IEA) “World Energy Outlook 2018” report.
As such, the global LNG demand (trade) forecast volumes are as shown in <Fig.2>. 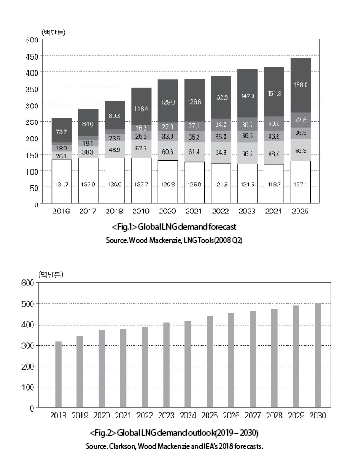 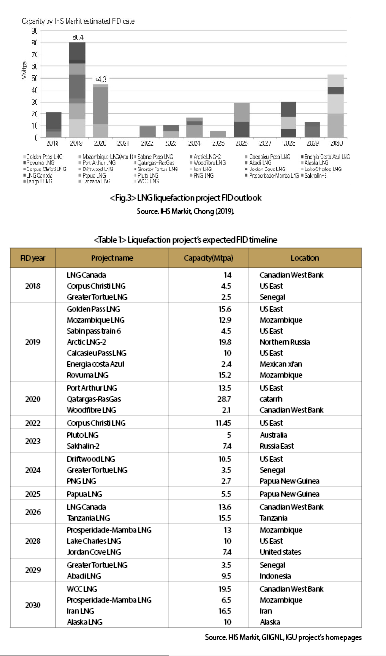 All projects are assumed to be operational after four years of initial FID, producing at 50% of capacity. By the fifth year, production is expected to be operating at full capacity. The following assumptions are made to calculate the distance effects of newly operational project exports: each project’s export region is assumed based on the region’s expected periodic import share as shown in <Fig.4>.
For JKT(Japan, Korea and Taiwan), market share will fall from 35% in 2020 to 29% in 2030 at a rate of 0.6% per annum. Simultaneously, other regions are expected to experience a 0.6% annual rise or fall in market share. Furthermore, market participants targeting Taiwan, Korea, China and Japan such as Australia, Canada and participants of the Sakhalin Project are expected to face a 12% drop in exports to regions aside from JKT, China and India.
The distance from liquefaction plants to the importing country and each project’s production volume relative to export volume is aggregated and calculated in ton-miles. JKT’s average distance is set to Korea, which sits in between Japan and Taiwan.
The distance for other regions, irrespective of the point of departure, is set based on 2019’s average transportation distance of 4,155 miles. Based on these assumptions, upon separating tons from new production project’s ton-mileage calculations, the transport distance of new exports will increase, as shown in <Table 2>. 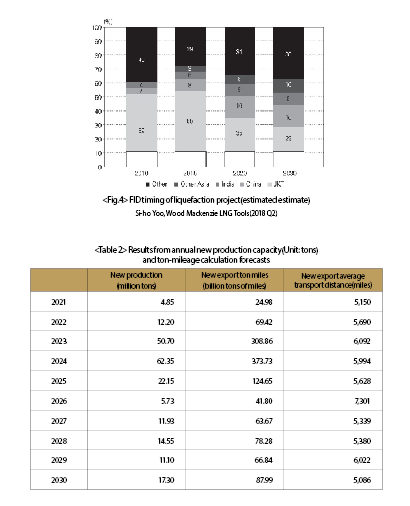 Regions with new projects such as the United States and East Africa are far from its consumers in East Asia, as such, an average distance of 4,155 miles is assumed.
Based on the new production capacity and export forecasts, calculation methods and results based on trade volumes and ton-mileage forecasts until 2030 are as follows. As mentioned above, trade volume and ton-mileage forecasts are made based on figures reported by Clarkson. Forecasts from 2021 to 2025 are made based on data published by Wood Mackenzie, and forecasts from 2025 to 2030 are made based on the average growth rate reported by the IEA.
What this means is that based on the assumptions, last year’s trade levels will be maintained, and annual trade growth will benefit from production exports of new projects. As such, by accounting for each project’s average transportation distance, ton-mileage yearly forecasts can be produced. Investor sentiment from two years ago accounted for FID tons, distance effects, the possibility of short-term trade growth, and other future demand expectations. The resulting forecasts are depicted in <Table 3>. 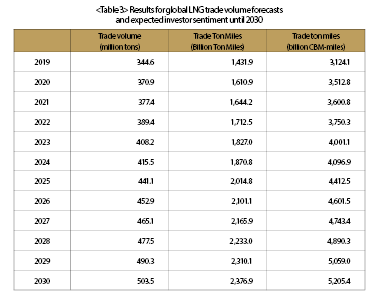 It is assumed that 50% of construction volume for a specific year would be completed two years after the initial order and the remaining 50% would be completed in three years. It is also assumed that ships would be disposed on its 30th operational year.
Note: The double-digit decimal figures on the left-hand side of the graph represent construction volume in 1 million cubic metres(CBM), and the whole numbers represent ships constructed. Data until 2018 are actual and from 2019 onwards are expected.
From this method, the following annual construction volume figures are expected. Calculations concluded that there would be a construction volume contraction of LNG carriers until 2021 and a further sharp decline from 2023 to 2024. However, construction is expected to return around 2025 and experience a large-scale construction boom in 2026. Construction volumes contraction from 2021 to 2024 likely corresponds to the effects of the supply to demand ratio contraction from large-scale carrier orders from 2018 to 2019.
From 2018, following increased demand and trade with China, transport distances have been improving; however, the delivery of ship orders made in 2018 is likely to dampen forecasts beginning in 2021. The trend will continue until 2024 when the situation is expected to improve again from increasing orders. Construction volume is also calculated based on order volumes and the construction timeline mentioned above.

3. Other Ships and Marine Plants Middle- to Long-term Outlook 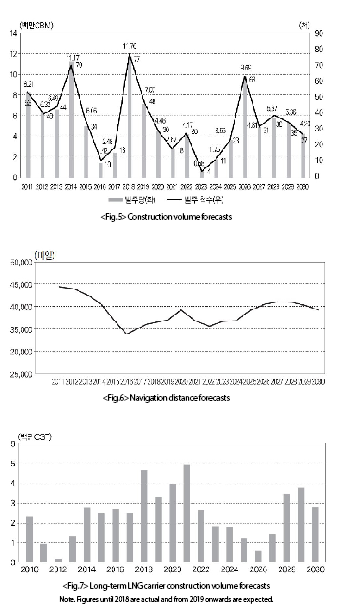 The marine plants market has been affected by diverse and complex factors since the mid-2000s as it closely followed oil prices and construction volumes followed marine explorations; however, due to the lack of periodic data, trend analysis has been limited. Marine plants are greatly influenced by various factors of the energy industry’s marine development and renewable energy development projects; as such, it has been difficult to analyse the market impacts of selective factors. But close correlations between oil prices and exploration efforts have been identified. However, the lack of data and changes to production patterns from the Shale boom, the industry’s correlation with oil prices and exploration is likely to diverge.
Passenger ships, cruise ships and other types of ships are categorised into separate markets. Passenger ships and cruise ships are influenced by the global economy, tourists and low-cost airlines, and are dominated by European ship makers. Furthermore, roll-on/ roll-off(RORO) ships, multi-purpose ships, refrigerated cargo carriers, tugboats, dredging vessels and others are also categorised into separate markets. However, due to limitations, all these markets cannot be considered. As such, this research will apply Korea’s ISFEM’s forecasts for other ships and marine plants. The construction patterns for major ship types account for the ship’s age and Clarkson’s research on market changes.

ISFEM’s announcement on the KOSHIPA’s other ship market forecasted an annual average of 12.4 million GT from 2019 to 2024 and continued growth of 10.1 million GT from 2025 onwards.
Upon examining disposal volume offshore plants, RORO and cruise ships, the average disposed vessel’s age over the past three years was 33.2 years for offshore plants and 34.5 years for RORO and cruise ships. The average age of operational vessels was 18.3 years and 22 years, respectively. Assuming the point where operational offshore plants reach its 34th year of operation and RORO and cruise ships reach their 35th year of service, construction volume is expected to reach its highest in 2025 and lowest in 2028. Construction is again likely to repeat its cycle and rebound in 2033, fall for two years, then rise again in 2036.
Based on the assumption that ship carry capacity and the ship disposal rate are correlated with the global economic growth rate and oil prices, the following construction pattern forecasts are established. On average, construction is completed two years after its onset, and on this basis, an annual average construction volume of 11.4 million GT is expected from 2019 to 2030. Clarkson’s research on the ‘other ship’ market expects an annual ship disposal volume of 4.4 million GT, 42.7% of new ship deliveries.
For this section, forecasts will be made based on the number of disposed ships. In doing so, figures are converted into Compensated Gross Tonnage(CGT), and forecasts expect an annual average cruise ship disposal rate of 6.4 million CGT until 2025. The ship and vessel disposal rate will likely be expedited by increased ship deliveries which will continue for several years before gradually falling. 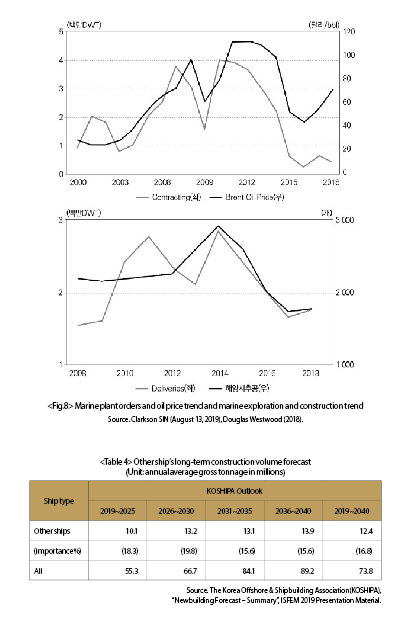 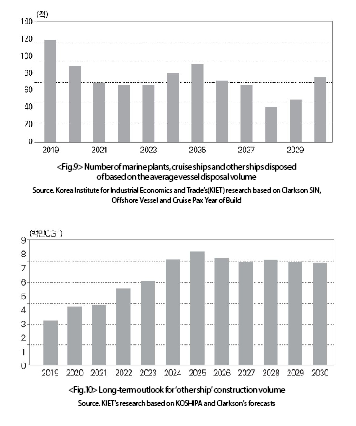 The information presented above is summarised as follows. The total ship and vessel construction volume over the past five years was an annual average of 34.5 million CGT but is expected to fall over the next six years to 29 million CGT, and rise again to a yearly average of 32.2 million CGT the six years after. Consequentially, a boom over the next ten years is highly unlikely. However, the global shipbuilding industry’s oversupply is expected to continue but is showing signs of improvement compared to 2019.
Upon comparing the demand volume forecasts for major ship types with international researchers, oil tanker and container ship forecasts are similar to Clarkson’s forecasts, and bulk carrier forecasts are similar to MSI’s forecasts. LNG carrier forecast figures are a third of Clarkson’s forecasts. Aside from LNG carrier forecasts, all other ship type forecasts are on average slightly lower than Clarkson’s forecasts. MSI’s actual data is significantly lower than Clarkson’s actual data; as such, the forecasts for this research will not be much higher than MSI’s forecasts. 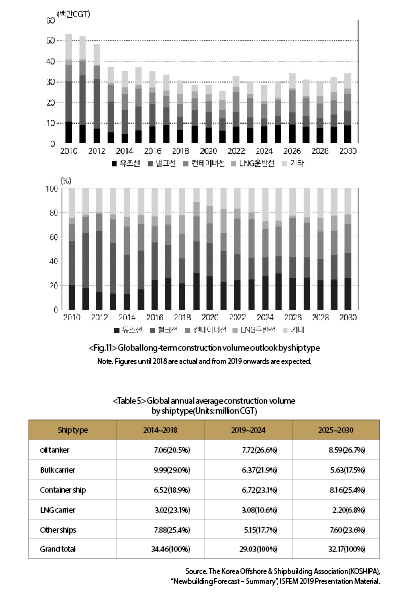 Upon comparing construction volume with the 2019 global shipbuilding outlook professional association’s figures, the entire market’s expected construction volume forecast is similar with KOSHIPA’s forecasts for the next seven years, and similar with SAJ’s forecasts for the five years after.
The results of the forecast show that structural changes by ship type can be expected. For oil tankers, market share will rise from 20.5% to between 26.6%-26.7%; for container ships, a rise from 18.9% to between 23.1%-25.4%. On the other hand, the bulk carrier market share will fall significantly from 29% to 21.9%. For LNG carriers, it is expected that market share will rise to 10.6% over the next six years, then fall to 6.8%. Aside from the oil tanker, container ship and other ship markets, the bulk carrier and LNG carrier markets are expected to undertake market restructuring. A long-term focus on the LNG carrier markets may not be ideal. Furthermore, China and Japan, the market leaders in the bulk carrier industry begin to turn their focus towards oil tankers and container ships actively, overall market competition may become fierce. 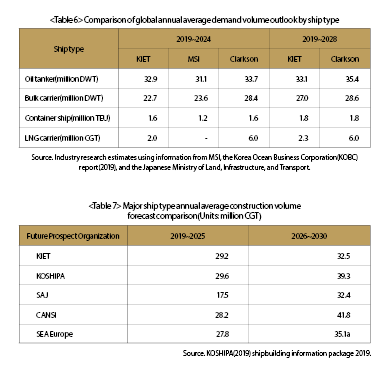