On June 2, 2019, Korea’s domestic and global shipbuilding industry’s became lively after Samsung Heavy Industries announced that it had signed a deal with Qatar Petroleum for a large-scale LNG carrier order. The so-called “Qatar jackpot” sent out signals which confirmed Korea’s position as a dominant player in the LNG carrier industry. Along with the Qatar-led tailwind, Korea’s shipbuilding industry gained further traction after plans were revealed for expedited orders from Russia and elsewhere.
Of course, there is talk that traction from this deal should not be slowed down as slot contracts are only temporary, and order volume can be adjusted before a formal order is placed. Furthermore, China has recently proved its LNG carrier construction capabilities after it also entered into a slot contract with Qatar for 16 vessels, leading to growing opinions that China’s abilities should not be overlooked.

The 23.6 billion Won Qatar deal, what is its implications?

On June 9, 2019, according to relevant sources, Korea’s three major shipbuilders–Hyundai Heavy Industries, Daewoo Shipbuilding and Samsung Heavy Industries–entered into a slot contract with Qatar Petroleum to deliver over 100 LNG carriers by 2027. A slot contract is a procedure by which construction space is freed-up before a formal order, although it is only a temporary order, its implications a big. The order size worth 23.6 billion Won highlights that Korea is a dominant player in the LNG carrier industry.
As a matter of fact, following President Moon Jae-in’s talks with the Emir of Qatar, Mohammed bin Thani, in January 2019, the “Qatar deal” can be considered the Korean shipbuilding industry’s top priority. During the talks, Qatar’s Minister of Energy and CEO of Qatar Petroleum Saad Sherida al-Kaabi raised expectations for a large order after he said that he was planning on acquiring 60 new LNG carriers.
Korea’s shipbuilding industry’s LNG carrier construction technologies are recognised as being more advanced than that of China’s; however, given the Chinese government’s ship finance support, Korea’s shipbuilding industry’s hopes were short-lived. Of course, in the process, Korea’s former Prime Minister, Lee Nak-Yeon, served as a support force through holding a series of meetings with Qatar’s Secretary of State.
However, last April, Korea’s shipbuilding industry was surprised after Qatar Petroleum gave 16 vessels from the first round of orders was given to China’s Hudong-Zhonghua Shipbuilding. During the second round of orders, the atmosphere took a turn after Qatar Petroleum announced that it would increase the second-round order volume to approximately 120 vessels leading to early celebrations for Korea’s shipbuilders. 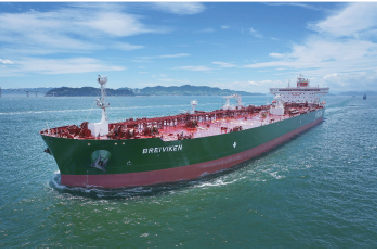 Will the tailwinds continue to blow for Korea’s shipbuilding industry?

Following Qatar Petroleum’s requests, detailed order values were not released by the affected companies. The industry expects that, depending on the construction environment of each company, order details may vary. However, based on calculations from the revealed 23.6 trillion Won, each company is expected to have orders valued at between 7-8 trillion Won.
According to the contract, deliveries are to be completed by 2027, and assuming that each vessel takes two years to construct, there is a high possibility that orders will have to be divided until 2024. From 2019 to 2024, assuming each company constructs 35 vessels within the period, each company would have to build seven ships per year. This would equate to 1.5 trillion Won-worth of orders. The significance of the COVID-19 Pandemic, which has seen Korea’s and the global economy come to a halt, is that this deal would guarantee a steady stream of orders over the next five years.
The order goes, after the Qatari government completes the charter contract with the shipping companies, the shipping company will submit a request with the shipbuilder. During this process, the details of the slot contract may be directly used in the actual contract, but depending on the energy market, changes may arise. This is why related industries should not celebrate too early.
Industry professionals believe that due to the drawn-out effects of COVID-19’s impacts on the global economy, market forecasts cannot be made. They also believe that strengthened government policy favouring renewable energy may negatively impact Qatar’s LNG carrier order volume.
The impacts of COVID-19 has seen LNG prices plummet as supply has been piling-up. Between December 2019 and March 2020, LNG prices fell below coal prices. If LNG prices remain low and LNG power generation overtakes coal power, then LNG consumption will rise, causing LNG carrier order volumes also to increase.
According to the shipbuilding industry, Korea’s shipbuilders are also expecting a rise in demand for LNG carriers from regions other than Qatar. Korea’s shipbuilders are expecting strong demand from areas with known LNG development projects such as Mozambique and Russia. Among the projects, carriers needed for Russia’s LNG projects are ice-breaking LNG carriers which are regarded as high value-added ships worth 1.6 times more than standard carriers. Korea’s shipbuilders have a competitive advantage in ice-breaking LNG carriers.
On the other hand, there is the prospect that the large-scale LNG carrier orders signed between Qatar Petroleum and Korea’s three major shipbuilders may lead to a drop in the future exchange rate. As the orders will take several years to complete, the shipbuilders may sell forward exchange rates to hedge any possible exchange rate risk.