(2) Categorisation
There are two classes of wind turbines-onshore and offshore, with which categorisation depends on installation location. Offshore wind turbines, like onshore turbines, have a rotor and generator installed on top of a tower, which is held together with a substructure.
Offshore wind power is further sub-categorised into fixed – substructure is attached to the seabed – and floating – substructure is on-water.
- Depths under 20m: In shallow waters, gravity-based and monopole structures are widely used.
- Depths under 40m: Jacket-style foundations, such as tripods, are generally used. Jacket application is possible for large wind turbines over 5MW; however, potential stress on connection points must be duly considered during the design phase.
- Depths over 40m: In deeper waters, floating wind turbines are preferred over fixed turbines.

(1) Necessity
Floating wind turbines are more environmentally friendly than onshore turbines. Furthermore, it is simpler to set up larger offshore wind farms. The seabed is also relatively flatter than dry land making for a lesser turbulence intensity and a consistent wind direction.
The further-out and deeper the sea gets, the wind gets stronger, which allows for usage of a greater area as a wind farm. If the seabed’s gradient is too steep, installation of fixed wind turbines becomes difficult, thus limiting installation to shallow waters.
Floating wind turbines are used in deeper waters to take advantage of stronger winds. Also, as floating turbines do not require fixation, the depth and condition of the seabed are not particularly important. This allows for application into new and previously inaccessible areas of the sea. However, high costs associated with greater distances to onshore grid connection and offshore construction compared to onshore construction must be considered. 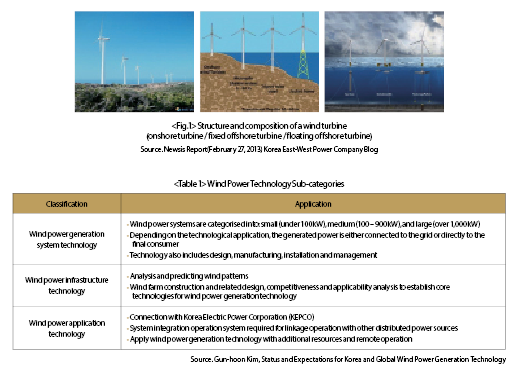 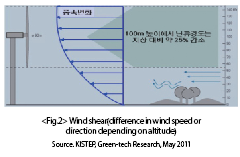 ① turbine(generator)
A wind turbine is composed of a tower, blade(s), gearbox, and several other elements.
- Tower and Blade: The tower supports the wind generator, and the generator then converts wind energy into rotational energy.
- Hub system and Shaft: The hub system connects the pivot and blade(s) / The shaft delivers rotational energy from the blades to the gearbox or generator.
- Gearbox and Generator: The gearbox converts the pivot’s low revolutions to high revolutions. / The generator receives mechanical energy from the gearbox and converts it to electrical energy. 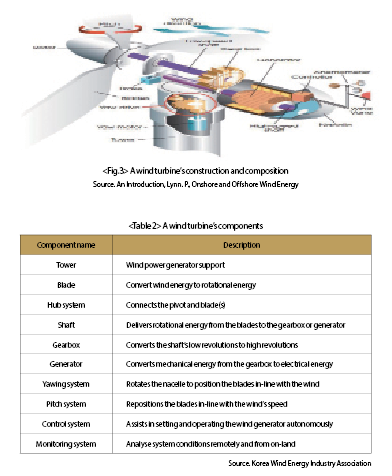 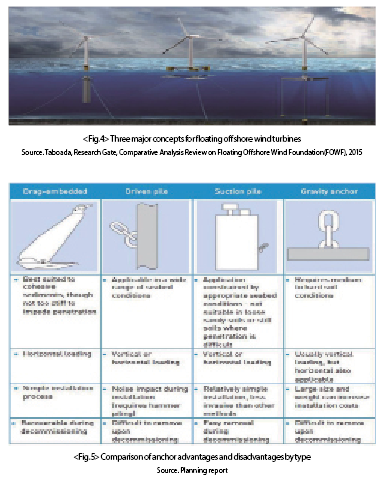 The mooring line helps keep the floating body within a specific area. It is primarily composed of a mooring line and anchoring.
- Mooring line: The floating body is fixed underwater to the mooring system. The mooring method varies depending on the upper structure and the water’s depth. The mooring line also varies – slack catenary, taut catenary or a tension leg mooring system – depending on the installation method and difficulty.
- Anchoring: The dynamic effects of the water’s depth and anchoring, condition of the seabed and interaction with the anchor, the applicability of new material, and high-quality monitoring solutions are all required. Drag embedded anchor systems are generally used for semi-submersible platforms; however, recently, suction systems are gradually being applied. 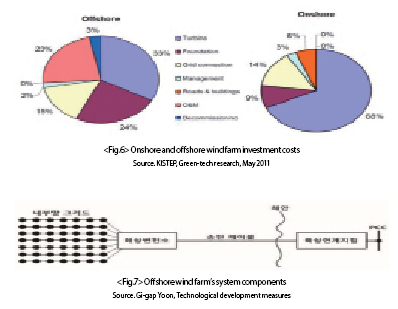 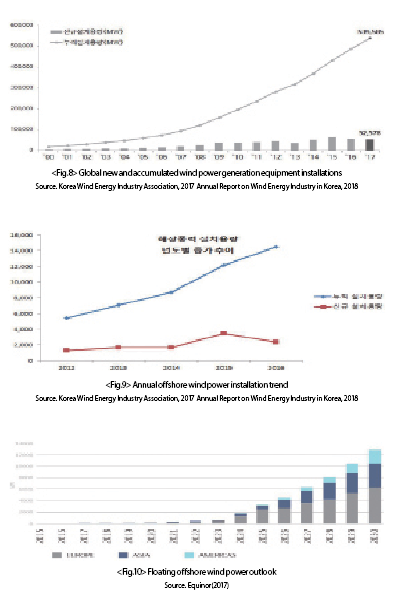 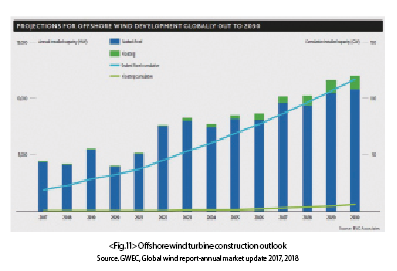 (2) Korea
During 2H 2017, Korea’s domestic wind power installations totalled 1,139.91MW, with 97% of all installations being made onshore. The onshore installations consist of 86 farms and 560 turbines, which cumulatively produce 1,101MW.
During 2018, there was a total of 40 planned offshore wind farms which either planned or being constructed. Of those, eight were floating offshore wind farms. From the fixed offshore wind farms, Tamra Offshore Wind Farm, Korea’s first industrial offshore wind farm, which sits 1km off the Western coast of Jeju Island has a total installations capacity of 30MW and produces 85,000MWh annually.
The Seonam Offshore Wind Farm(fixed turbines) is approximately 10km off the West coast of Korea with a total capacity of 400MW. It is currently undergoing a three-step installation process.
- Stage 1(Feasibility): Construction of a substation and a 60MW farm was underway by 2019 H2.
- Stage 2(Demonstration): Construct a farm with a capacity of 400MW(inclusive of 60MW from stage 1)
- Stage 3(Expansion): The farm will be expanded to have a total capacity of 2GW(inclusive of 400MW from stage 2)