With marine two-stroke engines subject to more technical variables than ever before, the need for continuous cylinder oil monitoring has become pressing

Managing lubricating oils–luboils–on board ships operating remotely has always presented a challenge for engineers at sea. There are the practical issues such as ensuring that the right products are available in the right quantities at ports on a schedule, or possibly holding enough reserves on board if a ship’s schedule changes.
More recently, with far more sophisticated marine engines in service under changing operating parameters, the need to monitor the condition of shipboard components has become pressing, with the analysis of luboil samples a key indicator of machinery condition. The case for lubricant monitoring on board ship and analysis in laboratories ashore has become increasingly convincing.
A wider mix of marine fuels, including new blends with no track record, and specific requirements by OEMs that the latest engines run on strict guidelines specified by them is making luboil monitoring and analysis more important than ever before. Mr. Joris van Brussel, Shell Marine’s General Manager, notes a recent upturn in customer interest but is expecting that “to increase significantly as soon as we start hearing about one or two challenges in the field.”
Until recently, there was limited technology available for monitoring the condition of shipboard components by taking luboil samples. Now, though, with new connectivity, it is possible for samples taken on board ship in the middle of the ocean to be assessed and subsequently compared with tests undertaken ashore. These ensure that main engines and other components are not suffering undue wear and are operating within their design parameters.
Yet many shipowners and managers have not yet adopted new systems. Luboils figure prominently in a ship’s daily operating expenditure and amount to a major cost centre. With a range of new relatively untested fuels now a part of the bunker mix post IMO 2020, effective luboil management is more important than ever.

Today, the technology is available to facilitate a whole new approach: ship operators now have scope to control and potentially reduce luboil bills, as well as reinforce their risk management systems.
Luboils are important for so many aspects of a ship’s operation that is it sometimes easy to overlook the critical part they play in ensuring the vessel runs according to plan. They are required to lubricate and protect main engine and auxiliary components; they are needed to ensure the smooth-running of deck machinery and other cargo handling equipment; and they are also necessary to protect machinery that operates at oil-to-sea interfaces such as propellers, stern tubes and thrusters.
Mr. Marcus Schaerer, Shell Marine’s Global Technical & Operations Manager is overseeing the introduction of a growing digital portfolio of ‘smart’ software systems that provide ship operators with new scope to manage luboils and the machinery for which they are required.
This includes day-to-day monitoring of feed rates and usage, but also the deeper analysis that is now possible and can reveal information that has not previously been available to engineers at sea; variables such as component wear rates and the impact of new bunker blends. 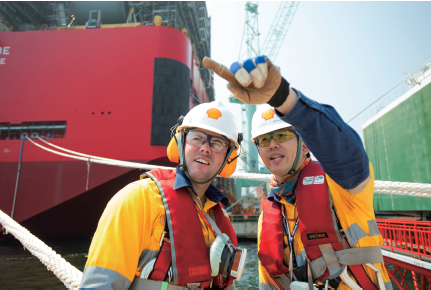 Until recently, seagoing staff could only carry out a limited number of tests at sea, but new connectivity means that a digital approach is possible. This can reveal the potentially harmful effects of substandard fuel and the impact of specific dangers including cat fines and other contaminants that can potentially wreck the internals of a marine engine.
“There has always been a need for luboil monitoring,” Schaerer explained, “but often many ship operators haven’t done it. The issue has become more acute recently. Over the last few years, the pace of new engine development has moved so fast as OEMs optimise designs for improved fuel economy, and so we see new challenges arising after new engines are introduced to the market.
“More than ever, OEMs have been pushing the need to monitor what’s going on properly in your engines,” he continued, “so that you have the best possible chance of catching any issues early on. With IMO 2020 now in place, even more variables have been introduced.
“We’ve got new engines, a complete change in the fuel that is used, and more uncertainty. That underlines the hypothesis that the closer you monitor the engine and keep an eye on what’s going on - the best chance you have of stopping something before it becomes catastrophic.”
When things aren’t actually failing, some owners may see it as an incentive to do less sampling and testing but to be truly effective luboil management needs to be continuous.
“There are still many shipowners who look at ship operation on a short-term basis,” he pointed out, “and ask how long are we going to keep this vessel and do we run her as cheaply as possible over that time?”
In fact, “short-term” thinking was surprisingly widespread. “We recommend Shell LubeMonitor, a condition monitoring programme for two-stroke marine engines which offers access to tools and advice to help strike and maintain an acceptable balance between cylinder oil costs and wear-related maintenance expenses. However, for the two-stroke engines for which we supply products, less than a third have any monitoring at all. And by this I don’t mean Shell LubeMonitor, but any standard used-oil analysis.”
Schaerer believes that more ship operators are likely to adopt luboil monitoring strategies in the months ahead, however, particularly if issues arise from the introduction of new 0.5% sulphur fuel blends. He also predicts that improved connectivity between ship and shore will underpin new luboil monitoring technology and greater functionality in the future that will shift attitudes. Real-time, sensor-based monitoring is an important goal for luboil management and may only be a short time away.
Monitoring and analysis essential in effective risk management

Shell Marine clients have the option of two possible services for monitoring and analysing luboil samples. The company’s Shell LubeMonitor, a new version of which is set to be released any time now, is a cylinder condition monitoring system in which the data from samples taken on board ship are sent ashore via the company’s Marine Connect system.
Samples are then uploaded into a database ashore, analysed by diagnosticians and compared with shipboard readings. Luboil issues are addressed with recommendations made to shipboard staff whilst any anomalous sample readings from ships are notified as possibly requiring a recalibration of shipboard equipment.
Shipboard staff are sometimes reluctant to make any changes to engine operating parameters as a result of feedback from luboil sampling. But the Shell LubeMonitor service has inspired more confidence among engineering personnel at sea, partly because today’s more critical engines have strict operating parameters laid down by engine manufacturers. There has been a definite upturn in interest from new customers who are implementing new engine-related risk management procedures.
Complimentary to Shell LubeMonitor, Shell LubeAnalyst was launched in April 2019, as a new technical service which replaces Shell Marine’s earlier Rapid Lubricant Analysis (RLA).  Customers can log in to a portal and dashboard which provides insights into the analytical results of samples that have been sent. For example, the samples are categorized into ‘Normal’, ‘Action’ and ‘Attention’ and then provide a means by which comparisons can be made with similar machinery on other ships in the fleet, for example, so that users can get better insights from the data.”
Customers who previously used the RLA service have been migrated to the new set-up which is now used by about 90% of clients although this might not necessarily be on the main engine; it might be being used on the stern tube product and other supplementary equipment, for example.

These customers are now logging in to the new Shell LubeAnalyst portal more frequently and Schaerer says that this year-on-year growth is an encouraging sign. A greater number of luboil samples are now going through the system than ever before, he says.
Currently, the set-up is not developed for real-time analysis, given that samples need to be sent to laboratories for testing. However, the dashboard includes a ‘tracking’ function so that customers can see the position of a sample across the system. If a sample is found to be normal, it gets a green light and the next time the customer logs in to the portal, this information is available.
If, on the other hand, there is an issue with the sample, then it will be sent on to a diagnostician for further analysis. Recommendations are then posted on the portal which, once again, are available to the customer at the next log-in.

Digital co-creation strategy a ‘win-win’ for everybody

Complementary to luboil analysis, Peter Decock, Commercial Manager Marine Digital for Shell Downstream Services International BV, is heading a unique project that promises to transform luboil management through a smart digital set-up called AccuPort. The system, currently completing its alpha trials, is designed to provide real-time information and complete transparency on the procurement of an increasingly complex range of luboils required by ship operators today.
Primary products for main engines and auxiliaries to secondary oils for gears, hydraulic applications and oil-to-sea interfaces, sometimes requiring environmentally acceptable products, are essential for safe ship operation. Through AccuPort, the right products will be made available in the right quantities and at the right time across a global distribution network that extends to more than 700 ports in 61 countries.
The beta-stage pilot trials are involving more Shell Marine luboil customers – ‘co-creators’ as Decock calls them – and between 500 and 800 ships are involved. Already the software has been enthusiastically received and some third-party ship operators have asked to join the project.
Luboils are a major cost centre and an important indicator on the longevity of main engines, auxiliaries and other shipboard plant, but Decock says that shortcomings in luboil management are rarely the fault of human beings.  Rather, issues arise due to poor information.
Until recently, limited connectivity between ships and shore meant that office-based managers had no clue about luboil volumes remaining on board, or whether the right products from their chosen supplier would be available at the next port of call. Meanwhile, shipboard personnel might not even know where they were heading next.
If the right products are not available, there can be far-reaching implications, Decock points out. These sometimes involve extra time in port while last-minute luboil supplies are procured before a ship sails, or possibly require an extra port call if hydraulic oil is not available at a destination port, for example, putting ships’ cranes at risk. 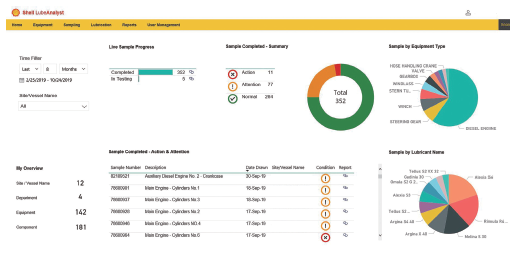 Decock says that he has been very encouraged by the reception the AccuPort software has received so far. “Before starting this job, I heard stories about shipping people being resistant to change. Actually, my experience is quite the opposite.”
Large companies facing equivalent scenarios usually commission third parties to design systems which are then adopted in-house or leave independent operators to build stand-alone software systems and then adopt them. Neither approach is anything like as effective as Shell’s strategy in developing AccuPort, Decock believes. Working together with customers during the alpha and beta pilot stages has enabled a range of features to be developed and included in the software which Shell Marine, as a supplier, might not have deemed useful, he says.
He gives an example. Some customers have asked whether it would be possible for products other than those supplied by Shell Marine to be managed using the AccuPort platform. While no decision has been taken on this yet, AccuPort’s open set-up could become an appealing feature for other ship suppliers in its own right, whilst potentially enhancing Shell Marine’s customer base at the same time.