(1) Project summary
Cooperation between the Ministry of Science and ICT and the National IT Industry Promotion Agency (NIPA) helped synergise the shipbuilding and marine industry with ICT and software to increase the competitiveness of the project and also provide funding for technological development and a basis for further development for a new project.

(2) Project contents
- The basis for further development: To create a foundation for the shipbuilding and marine-ICT synergy-related ICT and software quality and performance accreditation infrastructure and labour education, marketing and synergy network establishment. Open a ‘Shipbuilding and Marine ICT Innovation and Synergy Centre’ and introduce a real-time simulator, data analysis and software-testing equipment to provide various support services.

- Technology development: Funding is required for multi-use technologies and technologies necessary for commercialisation efforts to help diversify shipbuilding and marine ICT synergy. Core technologies will be developed and marketed by non-for-profit organisations such as KETI and ETRI, SMEs will produce application technologies, and shipbuilders will conduct participation and final-use.

(3) Summary of key results
- Foundation: Construction for the Shipbuilding and Marine ICT Innovation and Synergy Centre began in March 2018 at ‘High-tech Town’ with construction finishing in October 2019. The technological development support equipment is gradually being introduced following demand and the centre’s plans. In 2018, equipment was running at 37.3% of full capacity.

- Technological development: From 2016 to 2018, two core technologies and 22 assignments were selected for further development. Usability was the key criteria for all developments with applications in IoT platforms, support for fitting manufacturing, remote control and maintenance, and an all-inclusive platform.

(4) The projects notable achievements
The project’s participants have successfully applied technologies from the Fourth Industrial Revolution to 17 of the 24 assignments (70.8%), which has helped to secure quality and cost competitiveness against other competitors. Large shipyards have begun applying IoT platforms to increase productivity (saving 50% in costs) through technologies such as smart inventory management and logistical equipment monitoring. Application onto marine plants has helped to minimise expenses during the fitting installation and verification process while also increasing productivity. Use onto the shipbuilding and marine production simulation system has also contributed to increasing process planning efficiency and its effects.
Distribution of fittings by sub-contractors to large shipyard have increased significantly from a 50% to 90% distribution efficiency following the implementation of a fitting procurement system. Also, manufacturing planning time has decreased ten-fold following the implementation of an operational information-sharing platform. 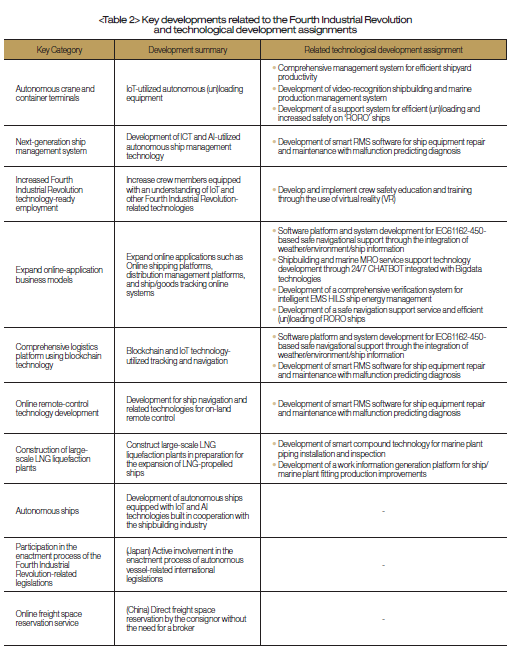 (5) Plans
- Foundation: Active measures have been implemented to support the Shipbuilding and Marine ICT Innovation and Synergy Centre. Following the completion of the project, measures will be developed and applied in support of the centre’s independence through research, support for specialised shipbuilding and marine-ICT synergy software testing and software quality test modelling.
- Technological development: Plans are being made to strengthen support for the successful application of technologies with a goal of 35% application by 2020. Furthermore, to improve the quality of development results and secure competitiveness, pilot application consulting with the project planning committee and software consulting with specialised companies will be carried out.

2. ICT Synergy Industry4.0S (Shipbuilding and Marine) Project and its effects
(1) Purpose of analysis
The project’s goal is to help establish world-class shipbuilding and marine industry and also provide ICT/software R&D funding for SMEs in the shipbuilding and marine industry. NIPA’s ICT synergy ‘Industry4.0S project’ is, with companies, undergoing relative analysis to understand the effects of this project.
Upon examining this project from an accounting point-of-view, the governments R&D funding will provide a sharp increase in profits for beneficiary companies in the short-run, in turn, funding will help increase employment opportunities in the mid- to long-run. However, analysis runs both domestically and overseas shows that the effects of government funding into R&D shares no correlation with increasing results. Periodic review and analysis are necessary. As a result, the purpose of this analysis is to examine whether this project will provide positive results to beneficiaries of the shipbuilding and marine project.

(2) Method of analysis
This analysis will attempt to identify whether results (revenue and R&D expenditure) of companies participating in the shipbuilding and marine project are better than non-participant companies. To define the success of participants, comparisons of results must be made with those of ‘non-participants’ of similar size. The shipbuilding and marine project’s data reflect 2017 revenue and employee numbers of the 20 project participant companies (excluding non-for-profit companies) taking-part in the 22 technological development assignments. Comparable companies will consist of 112 companies out of the 232 registered with the Korea Marine Equipment Association (KOMEA), all with similar revenue and employee numbers.
Regarding R&D expenses, project participant comparable companies spend on average 0.87% of revenue on R&D. However so, actual R&D expenses of the project’s participants are difficult to predict; however, the project's funding is specifically for the beneficiary’s R&D purposes. Along with an estimate of the company’s sources of R&D funds, this analysis’ will apply a conservative estimate for the project’s R&D expenses.

(3) Results of relative analysis
Upon average comparative analysis between project participant’s and the comparable companies in the shipbuilding and marine industry, it is established that project participant companies spent, on average, more on R&D than its comparable companies. However, the revenue of the comparable companies was higher(on average, 5,831 Million KRW) despite having similar average employee numbers. Regarding R&D expenditures, project participants had higher expenses(on average, 149 Million KRW), which is reflected by their higher average spending of 4.12% of revenue. The results of the analysis highlight that project participant companies either have higher revenue or similar employee numbers relative to comparable industry companies. When considering the relativity of scale and funding within the shipbuilding and marine industry, which consists predominantly of SMEs. It must be acknowledged that it is difficult for SMEs to allocate a significant proportion of their revenue towards R&D. Considering the limitations for self-funding amongst the shipbuilding and marine industry’s SMEs, fiscal assistance provided by the project will help SMEs to prepare for the Fourth Industrial Revolution and pre-emptively respond through technological developments by increasing technological competitiveness and ongoing investments.
Employment relative to revenue, comparable companies employ 3.6 persons per one billion KRW, while project participant companies employ seven persons per 1 billion KRW. The results of the study show that participation in the government’s R&D technology development project increases R&D investment, employment, sales and operating profit of project participants. Excessive results are expected upon the project’s completion. Results also show that the benefits of project participation increase exponentially. It highlights the fact that government-supported R&D both accelerates and promotes R&D investment of project participants. In particular, the project participants generated 22 commercialisation in 2018, averaging 1.31 commercialization per one billion KRW in funding, higher than the Ministry of Science and Technology’s R&D average of 0.17 and the ICT industry’s R&D average of 0.89.

2. Implications of major policy in response to the Fourth Industrial Revolution
Upon examining Korea’s major policy responses, further efforts are necessary regarding the policy-wide application of the Fourth Industrial Revolution technologies (autonomous navigation, AI, IoT, blockchain, etc.) for the shipbuilding and marine ICT industry. The key contributor to Korea’s shipbuilding industry’s global recognition was not only due to the competitiveness of its large shipbuilders but also from continuous technological development and reliable distribution from Korea’s shipbuilding machinery manufacturers. With this said, the government should actively provide funding for the shipbuilding and marine ICT industry’s various SMEs as well as reinforce its industry-wide support program for SMEs and large corporates.

3. ICT synergy Industry 4.0S project’s future trajectory
As demand for software being developed for ‘futuristic smart ships’, which previously was not included in the project, gradually increase, there is an increased need for discussions regarding follow-on projects with respective government departments once the current project ends in 2020. Autonomous vessels and other futuristic smart ship-related technology are being developed by other projects (Ministry of Trade, Industry and Energy); however, as their projects are hardware-centred, further ICT and software-centred projects are further required.
Currently, AI technology can be applied to various aspects of the shipbuilding and marine industry such as autonomous ships, unmanned port (un)loader and next-generation vessel-related systems, as such, further funding for development is necessary. For the revival of the shipbuilding and marine ICT industry, a government-supported, comprehensive approach is required for both SMEs and corporations to develop both AI-supported smart shipyards and ships. ​