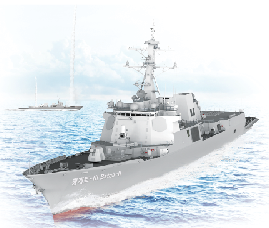 Seoul, South Korea – October 11 – Hyundai Heavy Industries(HHI) announced on Thursday that it has signed with the Defense Acquisition Program Administration(DAPA) a KRW 670 billion contract for product engineering and construction for the first vessel of the Gwanggaeto the Great-class III batch-II.
The vessel to be built by HHI under this contract is the first of the three new Aegis destroyers that will be added to the South Korean Navy’sfleet, to be constructed in HHI’s Ulsan-based yard scheduled for delivery by 2024.
With full displacement of 8,100 tons, the new Aegis destroyer has an overall length of 170 meters and can sail at a maximum speed of 30 knots(approximately 55 km/h).
Featuring a newly added Ballistic Missile Defence(BMD) capability, the destroyer can upgrade detecting and tracking capability that has more than doubled as well asan improved submarine-detection range that has more than tripled compared to those of the nation’s first Aegis destroyers, therefore, expected to enhance the naval forces’ operational capabilities. It will also boast a highly formidable combat system equippedwith various weapons, including a five-inch gun, guided missiles and torpedoes.
HHI has a successful track record of working on the basic design of and constructing the South Korean Navy’sfirst Aegis destroyer named Sejong the Great, which was commissioned in 2008. Having also built the nation’s third Aegisdestroyer named Seoae Yu Seong-ryong, HHI, with the recently won contract, is now set to be heralded as the builder of three out of the four Aegis destroyers in the nation. To date, it remains the only South Korean shipyard capable of both designingand building Aegis system-equipped vessels on its own.
“This new contract we won is yet another testimony to how HHI is recognized as a rich repository of superior technologies,” commented Sang Hoon Nam, Executive Vice President & COO of HHI’s Naval and Special Ship Business Unit. “We aim to help the naval forces secure key weapons systems and its operations go ‘smart’ with enhanced capabilities, by successfully completing this project.”