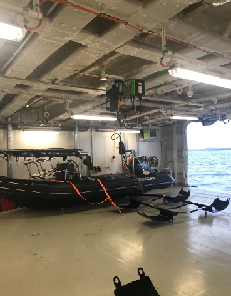 Lifting Equipment Store(LES) has supplied three custom 1t capacity ATEX-rated hoists for installation in the garage area of the Scenic Eclipse, a six-star mega yacht that recently completed its maiden voyage.
Stourbridge, UK-based LES delivered the German-made Stahl hoists, which each have a 4m height of lift, to the Uljanik shipyard in Croatia. There, they were fixed to the garage ceiling and bolted into a flat structural element to facilitate the lifting, movement and storage of 11 Zodiac Mark 5 inflatable boats. In the same garage, located just above the waterline aft aboard the luxury vessel, a chase boat and a seven-seat U-Boat Worx Cruise Submarine 7 will also be stored. As the Zodiacs are gasoline-powered, it was a requirement that all material handling and other equipment were ex-rated.
James Griffiths, a maritime veteran and project captain at Scenic Ocean Cruises, who will skipper the 169m-long Scenic Eclipse, explained that the twin-speed hoists would combine with a crane and a trolley system in the garage. Prior to deployment, an operator will utilise a pendant control to lift one 650kg boat with a single hoist and lower it onto a trolley, which will take it beneath the hook of a crane for lowering into the water. The process will be repeated in reverse. Zodiacs are equipped with a four-point harness that comes to a single lifting eye. Griffiths pointed out that all three hoists could be operational at any one time.
The Zodiac fleet is expected to be in daily use during the Eclipse’s scheduled Antarctica voyages, which set sail from Buenos Aires, Argentina and dock in the UK 16 days later. Its maiden voyage, however, saw passengers and crew call at Reykjavik, Iceland; Quebec City, Canada; and New York, USA.