1. Study Background
(1) The Resilience Of The Shipbuilding Industry’s Demand And Rigidity Of Distribution Leads To Great Market Fluctuations
Resilience of the shipbuilding industry’s demand(orders received and transported) and rigidity of distribution (docks, construction facilities, and ship maintenance numbers) causes a market mismatch leading to cyclical industry boom and bust. These timing differences between demand and distribution is identified as one of the main causes affecting the shipbuilding industry’s market fluctuations.

(2) Depending On Market Conditions, Boom’s Lead To Repeated Infrastructure Investments And Bust’s Lead To Repeated Restructuring
Between 2002 - 2007, a global increase in transported goods from a booming market led to large scale infrastructure investments. However, the Global Financial Crisis(GFC) in 2008 led to restructuring. Korea also saw large scale infrastructure investments and the founding of new companies during the market boom, but fell victim, as with the rest of the world, following the GFC.

(3) Semi-permanent Capital Attributes Required In Long-term Investment Decisions
There are legitimate reasons when investing in capital, consequentially they are regarded as unnecessary investments. In 2007, there were warnings with regards to surplus production abilities; however, we believe that there was insufficient review due to excess orders and short-term profit seeking. The non-consideration of semi-permanent capital’s attributes during the decision-making process is regrettable.

2. Purpose Of The Review And Its Limitations
We review the ideal production capacity needed to contribute towards the mitigation of restructuring distress. But, is limited by various factors that could not be predicted and/or reviewed.

(1) Purpose
Considering the characteristics of the industry’s repeated boom and bust cycle, it is necessary to alleviate restructuring distress through prior appropriate investments. Review of appropriate mid-term production capacity should be carried out to alleviate the frequency of booms and busts. Also, the ideal production capacity of large shipbuilders and small-to-medium shipbuilders should be categorized separately to be adopted as references during restructuring.

(2) Limitations
Upon analysis in relation to production equipment(docks), there are various factors which cannot be predicted and/or reviewed. Also, there is a high possibility of irrational investments being made during market booms. On the basis of outlook and assumptions, a mismatch is inevitable and needs to be managed continuously into the long-term.
The study is limited to physical capital upon excluding factors which cannot be accurately measured such as production and labour efficiency.

(2) Production Capability And Adjustment History
A slump in the shipbuilding industry caused it to undergo structural changes to its production capacity by closing dry docks and disposing of floating docks. Domestic floating docks are usually sold-on to companies in the same industry, primarily for managing shipbuilding equipment and ship maintenance. However, once the industry economy begins to revive, the docks are likely to be used for building new ships.(Potential for production capacity expansion).

(1) Production Capacity
Maximum output usually refers to situations when production equipment is, under normal conditions, operating at maximum capacity(i.e. production efficiency and factory operation is at 100%). This report assumes a company’s maximum production performance is as defined by Clarksons(World Shipyard Monitor) and the Korea Shipbuilding & Marine Plant Association (CHO). 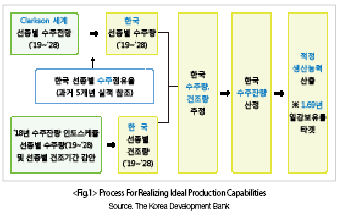 It is assumed that Korea’s annual share of order obtention is unchanged. Increased productivity, competing countries’ technological development·change in price competitiveness, etc is difficult to predict, so it is not considered.
Productivity increasing factors such as the introduction of Smart Yard using block enlargement, improved first-mover rate, and Big Data·Artificial Intelligence are not considered. The competitiveness of competing countries is also not considered; however, it is expected that China and Japan’s competitiveness will remain unchanged from current levels. It is assumed that from China’s poor on-site planning abilities, weak labour productivity, and inefficient maintenance systems, technological development· increased productivity will be stagnant. Japan is also expected to maintain current levels of market share arising from its ageing labour force, the shipbuilding industry’s diminished importance, and weak infrastructure investments. 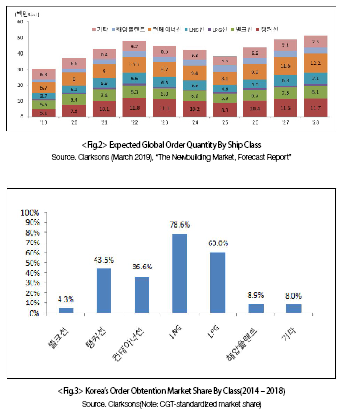 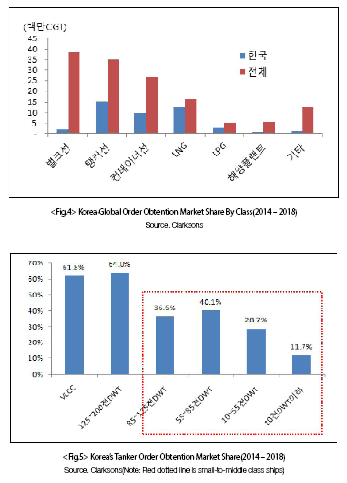 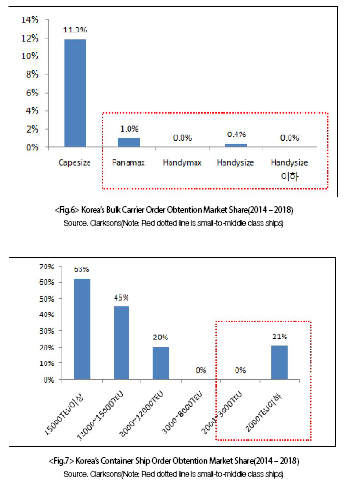 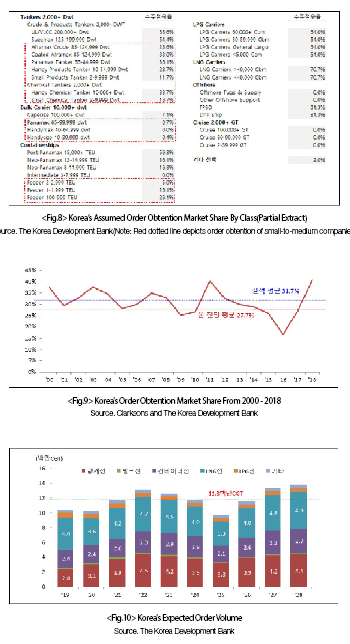 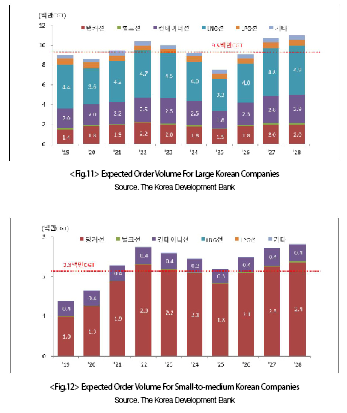 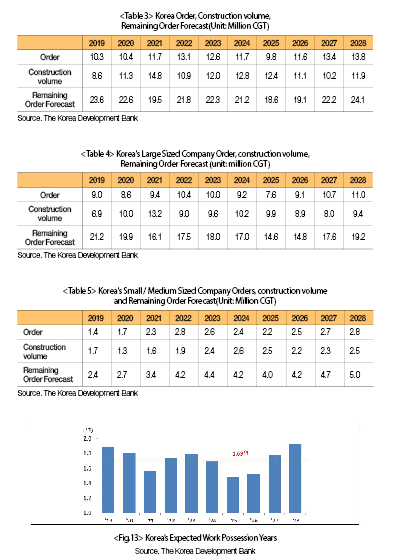 1. Current Production Capacity(13.1 Million CGT) Narrowly Exceeds Ideal Production Capacity(12.5 Million CGT) By 0.6 Million CGT.
If floating docks disposed of by domestic firms are excluded, current capacity closely resembles ideal capacity. It can be judged that production facility restructuring has been considerably successful.
However, considering the omission of data from several categories as well as forecast error in Clarksons’ aggregate data, extra production capacity is needed to allow for production growth. Clarksons’ data only aggregates CGT for FPSO and drill ship-type vessels, whilst excluding upper structures and dispersion supply from aggregate figures. Furthermore, unexpected market booms and fluctuations in oil prices need to be accounted for in production capacity considering the characteristics of large ships such as off-shore plants. 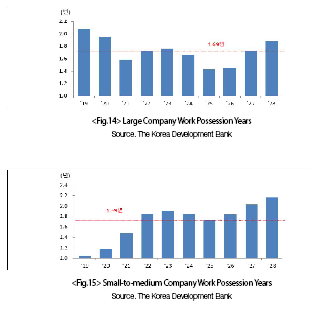 (1) (Large companies) Production capacity is at an ideal level. Productivity and quality reform for Smart Yard R&D is continuously needed.
- In the long-term, overseas block plants will withdraw considering the domestic production capacity. In the future, companies will refrain from establishing new plants overseas; Instead, they are likely to import manpower, if needed
- Continuously seek-out ‘Smart Yard-ization’ for productivity reform

(3) (Other) Caution should be given to the conversion of block companies to new ship builders, which can led to the establishment of overseas block plants for large shipyards 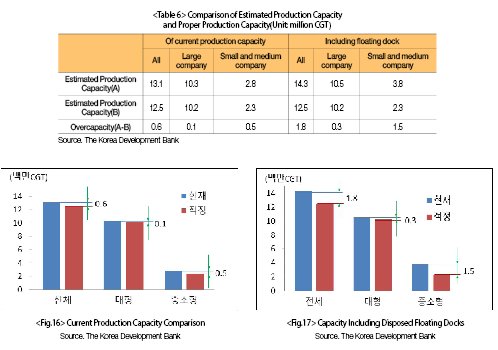