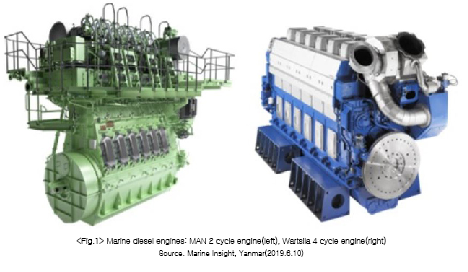 Diesel Engines used in various industries, such as the shipbuilding industry, are commonly referred to as Compression Ignition Engines.
A Marine Diesel Engine(HS Code 840999), depending on its standardisation and operational method, is categorized by the following:
- Speed: Fast, Average or Slow
- Use: Automobile, Shipping or Locomotive Industries
- Cylinder Arrangement: Horizontal, Vertical, V-type or Radial Engines
- Application: Two-stroke, Four-stroke, Single-acting or Double-acting Engines

Marine Diesel Engines used on boats, ships or submarines are Two-stroke or Four-stroke. Ships that operate at normal speeds use Two-stroke engines, while ships which require further support use Four-Stroke engines with higher torque. The most important parts of a ship’s engine are the crankshaft, the base plate, the cylinder liner, and the piston.

Korean shipbuilders have built over 30% of Greece’s ships. Subsequently, brand awareness of Korean parts is relatively high. When ship owners and importers decide on an engine, the ship’s builder or a ‘maker list’ provided by the builder holds significant influence. However, the high quality of parts manufactures in Germany and Finland is competition for Korean parts manufacturers.
During the Korea Trade Commission(KOTRA) - Athens Chamber’s interview with Argyris Vazeos, CEO of S. Vazeos & Sons., Vazeos stated that Greece’s ship engine parts market is worth an estimated USD 268 million. In addition, Vazeos expected the 2019 Ship Engine Parts Market size to grow 3 – 5% compared to last year. However, a lack of official statistics related to the scale of part imports from the Shipowners Society, the Ship Parts Importers Society or the Shipbrokers Association makes it difficult to confirm the figures. 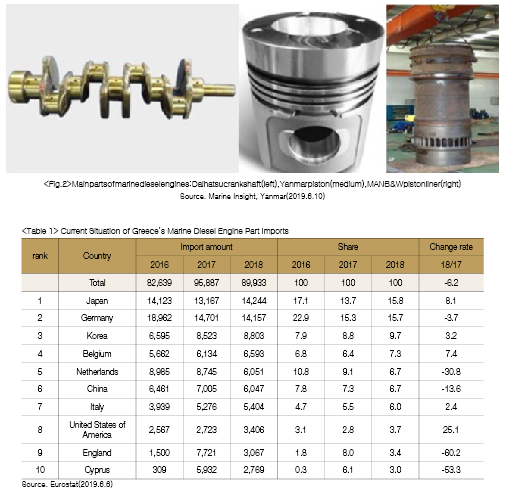 2018 marine diesel engine parts imports were USD 89.9 million, down 6.2% from 2017. The import market remained relatively flat, with an 8.8% increase compared to 2016.
Greece’s marine diesel engine parts imports are predominantly from Japan, Germany, Korea, Belgium and the Netherlands. Japan and Germany account for the greatest market share, with 28% of Greek imports coming from the two countries. The Netherlands maintained its position in the top three for the past three years; however, following a 30.8% fall in exports to Greece, it has fallen to a top-five import market worth USD 6 million.
Parts imports are not directly into Greece but to the country where the ship is being built or repaired. As a result, it is difficult to provide exact figures or market size estimates for Greek imports of Korean parts.

Greece’s domestic marine diesel engine part manufacturers are small enterprises that manufacture on a custom order basis. As a result, Greece relies heavily on imports.
According to the interview with Argyris Vazeos, MAN or Wartsila parts are predominant in the Greek diesel engine parts market. This is because most newly built ships are fitted with engines from either of these makers. Aside from those, Korean and Japanese brands such as Yanmar, Daihatsu, Doosan and Mitsubishi HI also have an active presence.
The marine diesel engine parts market is categorised into genuine parts, OEM parts, and after-market parts. Parts sold in Greece, genuine and after-market, depending on quality and guarantee period can cost up to 70% more than the country it was manufactured in. There are a variety of marine engines and parts, but the Yanmar M200L diesel and the Daihatsu DK-20 cylinder liner engine are common and cost anywhere between USD 450 – 700 and USD 250 – 450, respectively.

The final consumer of marine diesel engine parts is the shipowner. Parts are distributed through importers and agents who have well-established networks with company managers. Other means of distribution is carried out by stock dealers who acquire, store and supply parts with high turnover directly to importers or ship owners.
Local importers prefer to be official ship part importers (agents) for manufacturers. It is common for importers to request sole agency. This is because there are timely and monetary investments involved for agents to market Korean-manufactured parts to ship owners. Especially considering the fact that it takes 6 – 24 months for shipowners to purchase a part. Local companies do not release information related to marketing plans, yearly import quotas, etc., once they become official agents.
Korean manufacturers collaborate with Korean traders or distribute through agents. To conclude an agent agreement with a Greek company without going through a Korean middleman is difficult in the short-term as reviewing various conditions prior to the agreement is time-consuming. Most Korean companies prefer distribution channels which allows them to supply directly to local buyers rather than through supply to local agents.

Marine diesel engine parts are import tax-free because of the Korea-EU Free Trade Agreement; however, the parts are subject to a 24% local tax. Parts imported from Japan, following the EU-Japan Economic Partnership Agreement beginning February 1, 2019, are now completely tax-free.

When manufacturing marine diesel engine parts, standards and specifications must abide by international standards set out by the International Marine Organization (IMO), the US Environmental Protection Agency (US EPA), and the EU. In addition, parts require international certifications from institutions such as Lloyd’s, DNV, and Bureau Veritas.
Under regulations of the Emission Control Area (ECA), vessels passing through the area are subject to emissions restrictions set by the IMO at 0.1% or less, greater restrictions than the standard 0.5% for regulating sulphur oxides. Tier III regulations applied to ECAs around Europe, the Americas and China came into effect beginning 2016 in the Baltic Sea, North America, The Caribbean, and more. Under Tier III restrictions set out by the IMO, all ships passing through the ECA must have engines with Tier III engine approvals set out by nitrogen oxide emissions regulations.

Greek companies prefer to either purchase marine engine-related parts directly from the manufacturer or through local agents. However, when entering the Greek market it is best to target well-known local importers rather than ship owners. Diesel engine parts and related-parts marketing, including product explanation and presentations, need to be carried out specifically to skilled managers of ship owners and relevant companies. Brands included in the Korean shipbuilder’s ‘markers list’ helps build credibility for the product, further advocating the part marker.
Local ship owners and importers prefer parts from companies with good brand names, thus may be difficult from new Korean manufacturers to enter the Greek market. When importers consider purchasing a product, not only do they look at the price and quality competitiveness, but they also look at minimum order volume and product payment period. Prior to discussions with Greek owners, flexibility of the factors mentioned above needs to be discussed internally.