Offshore wind energy is a crucial pillar of sustainable energy provision. Key factors in securing the economic viability of this energy source are highly efficient turbines and high-performance mobile platforms or jack-up installation vessels for the establishment of offshore wind farms. The Innovation ranks in the world's "Top Three" of third-generation installation vessels for foundation structures weighing up to 1,000 metric tonnes. When this vessel was originally built in 2011, and also during its current upgrade, the operating company turned to Dillinger's Heavy Fabrication Division to source the required high-precision racks - in world-leading thickness - along with the corresponding hot formed chords. 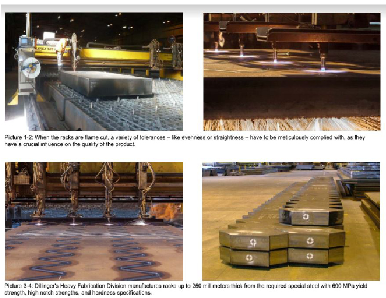 The Heavy Fabrication Division is an integrated service division of Dillinger, a global quality and technology leader for heavy plate, and is sought-after around the world as a partner for the development and realization of heavy-duty products in steel. Its portfolio also encompasses the racks and chords for the legs of so-called jack-up rigs for the offshore oil and gas sector, and also for the installation vessels deployed for the construction or maintenance of offshore wind farms. These steel components - along with the drives for the gear wheels of the jacking systems - count as the most critical components of a jack-up rig. Dillinger's Heavy Fabrication Division is one of the very few manufacturers worldwide that can supply racks over 180 millimeters thick, and Dillinger itself is a certified heavy plate manufacturer according to ABS and DNV GL standards. Currently, there is no other steel manufacturer in the whole world that can manufacture and process racks up to 250 millimeters thick from the required special steel with 690 MPa yield strength, high notch strengths, and hardness specifications. When the racks are flame cut, a variety of tolerances - like flatness or straightness - have to be meticulously complied with, as they have a crucial influence on the quality of the product. Because of their enormous thickness and sophisticated metallurgy, producing these racks to tolerances in the millimeter range is an extremely challenging task, but one which Dillinger's Heavy Fabrication Division fulfills with veritable surgical precision - thanks to its own internally developed machinery, sophisticated flame cutting technology, and decades of accumulated manufacturing know-how. At least two racks are flame cut from each of the up to 42 metric tonne heavy plates. The upgrade of the Innovation required racks with a thickness of 228 millimeters. Dillinger's Heavy Fabrication Division occupies an absolutely unique position globally through its ability to supply racks in such unparalleled thicknesses, currently up to 250 millimeters, along with the 120 millimeter thick hot formed chords that go with them. This means that customers get the components they require for their jack-up legs - made of extremely high-grade steels with identical metallurgical properties in exceptional thicknesses - as a complete package from a single source 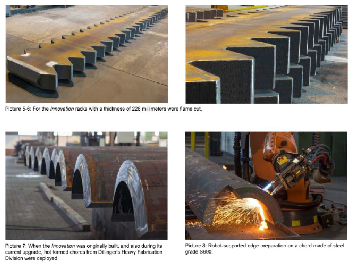 Dillinger's success in occupying this leading position also reflects the benefits of a strategic partnership with Traxys and the Jack-up Structures Alliance Inc.(JSA). Traxys is an internationally renowned expert for financing, marketing and sourcing in the steel mills and foundries sector, and has its headquarters in New York, NY. JSA, which is headquartered in Houston, TX, specializes in integrated project and production management of turn-key jack-up leg components for mobile offshore platforms and installation vessels. This alliance has existed for almost 30 years, with Dillinger supplying high-performance steels to the manufacturers of jack-up rigs. Initially, the orders were mainly just for repairs, but at the turn of the century the alliance led to the acquisition of a first new project in this market for Dillinger. David Mullaney, Executive Director Steel Finance Division, Steel Plates and Turbulars at Traxys, was quick to recognize the potential for the jack-up branch of Dillinger's integrated steel competency - consolidated in one location and with all the advantages of the tight dovetailing of its supply chain with its Heavy Fabrication Division. For this reason, he has also been working closely with Dillinger's Heavy Fabrication Division since 2009. "Since then, the market has experienced considerable change and growth," he explains. "Thanks to the production of heavy plate and components from a single source, we have been able to substantially strengthen our joint competitive position." Another contributing factor was Dillinger's enormous capacity for innovation. Even back in 2011, when the Innovation was first built, Dillinger's racks and chords were already the number one choice for the construction of the jack-up legs. At that time, the construction specifications were for racks with a thickness of 180 millimeters - which Dillinger's Heavy Fabrication Division promptly supplied. "Later, Dillinger became the first company to offer racks with thicknesses in excess of 210 millimeters for jack-up constructions, along with the corresponding hot formed chords in thicknesses of up to 120 millimeters," says Mullaney, who has also been collaborating with Jay Fogal, President at JSA, for over 20 years now. "The important thing in these projects," Mullaney emphasizes, "is to know the various players and to address them at the right time: the engineers in the design company who are developing a new jack-up rig; the operator who is buying the jack-up or the installation vessel; and the shipyards that produce them." This is exactly what the networks of Traxys and JSA are designed to do, enabling them to get in contact with potential partners at a very early stage and thus get Dillinger involved early on in the design and the development of new steel grades, thicker plates, or specific products. "One of the most difficult tasks in jack-up leg construction is the flame cutting of heavy, heat treated steels," says Jay Fogal, whose own company used to have to deal with this job itself. 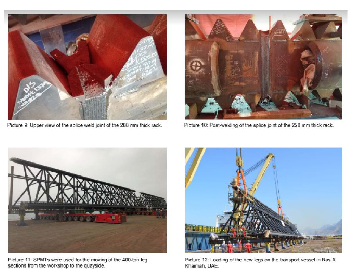 Continuous redefinition of the limits of feasibility

During the upgrade of the Innovation, Dillinger once again broke the boundaries of what was deemed possible in rack production. At 147.5 meters long and 42 meters wide, the Innovation is one of the world's largest installation vessels. It boasts a crane with a load capacity of 1,500 metric tonnes. It can anchor monopiles weighing up to 1,000 metric tonnes into the seabed at depths of up to 65 meters for offshore wind turbines. Its four jack-up legs each consist of three rows of racks, on both sides of which the chords are welded side by side for reinforcement. The legs are raised during transport from one location to the next. On arrival at the destination, they are lowered down to the seabed in order to jack the vessel up to its required elevation above sea level. On the Innovation, hoist motors in each of the four legs power 24 pinions that run up or down the racks, raising or lowering the platform. Enormous forces are at work here. Larger contact surfaces of the gear wheels significantly increase the service life of the legs. So the specification for Dillinger this time was to supply the racks in a thickness of 228.6 millimeters. And Dillinger succeeded in accomplishing this previously inconceivable plate thickness, not only in terms of metallurgy and the manufacturing process but also in terms of the fabrication of the racks with the required precision. As Jay Fogal explains, "We have a good instinct for limits of feasibility and for future market requirements, and, together, we are always pushing the envelope. Five years ago, we had already recognized that demands for even thicker racks would be coming our way. So Dillinger got a head start by initiating a range of tests into their manufacture and fabrication, and when the order for the Innovation came through, we were perfectly prepared to accommodate it." And David Mullaney adds, "Today, with its 250 millimeter thick racks, Dillinger has once again pushed the boundaries of what is possible even further." Such success brings rewards, as he goes on to explain, "Currently, we have already received a number of project inquiries for this plate thickness for racks." Even with the different manufacturing processes and varying component fabrication specifications this will involve, Dillinger still has an edge due to its integrated supply chain. Because the whole production process takes place at a single location, no heavy plate transport costs are incurred, which translates into shorter lead times and lower costs - an advantage that also played a major role in the Innovation upgrade. The installation vessel was still in use during the upcoming overhaul. Thanks to the close collaboration and concentrated know-how of Traxys, JSA, and Dillinger's Heavy Fabrication Division, only an extremely short period of time was needed for completion of the considerably more powerful leg components. As a result, the dry dock period for the Innovation could be kept to an absolute minimum.

Traxys is responsible for the financing of the jack-up legs - 20 to 30 percent of the costs of a new construction - and JSA can realize the projects all over the world. Dillinger manufactures the steel, which is directly processed into up to 250 millimeter thick racks and 120 millimeter thick hot formed chords in the Heavy Fabrication Division. The complete package - racks and chords - is then taken over by JSA. In a shipyard commissioned by JSA, or in the customer's own shipyard, JSA then uses the package to produce the complete construction exactly when and where the service is required. For the Innovation, JSA selected an experienced shipyard in the United Arab Emirates as the production site. "No other enterprise in this sector works the way we do," Jay Fogal points out and continues, "Our model has developed in the course of our collaboration, and that's what makes it unique today." For the customers, this exceptional supply chain, running through all stages of the project, offers an otherwise unknown level of reliability through trust in the perfect gearing of the strategic alliance between all the partners involved. "Any delay or error would derail the whole project," says Jay Fogal. And David Mullaney adds, "In our collaboration, everyone is involved in the project right from day one. So questions concerning new steel grades or plate thicknesses are raised and discussed at a very early stage, and we all work together on developing the answers." In his view, the advantages are unbeatable: "Thanks to the dovetailing of Dillinger's Heavy Fabrication Division with the company's own steel manufacturing process, we are able to offer a turn-key integral solution with these extremely sophisticated steels for the jack-up legs. We combine this with creative financial solutions, process the steels into finished jack-up legs, and provide highly proficient, practical project management with a variety of additional services - in contrast to all other steel mills." The Innovation is a prime example of this model at work - and of the leading position Dillinger's Heavy Fabrication Division occupies in the production of racks and chords in unrivalled dimensions.