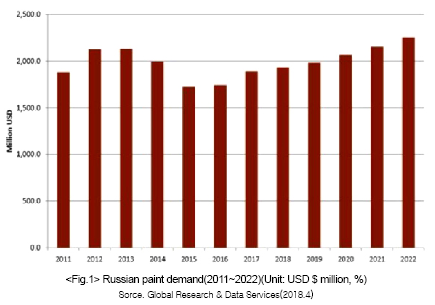 The Russian paint market has been growing from rising demand for construction as well as industrial development.
Following Russia’s financial crisis in 1998, the economy has gradually stabilized and the construction industry has recovered helping demand for paint to increase beginning 2000. Yet again, demand for paint receded following the Global Financial Crisis(2008) due to a contracting construction market. Demand for paint further contracted following the West’s economic sanctions on Russia in 2014. However, demand has steadily risen from large-scale construction projects such as the APEC Summit in Vladivostok(2012), the Sochi Winter Olympics(2014), and the FIFA World Cup(2018). In addition, continued shipbuilding, military fleet expansion, in accordance with ongoing developments in the shipping and aviation industry has steadily increased paint demand.
According to Global Research & Data Service’s ‘Paint and Varnish Market in Russia to 2022’ report, the Russian paint market is approximately worth USD 2 billion and is expected to grow continuously. 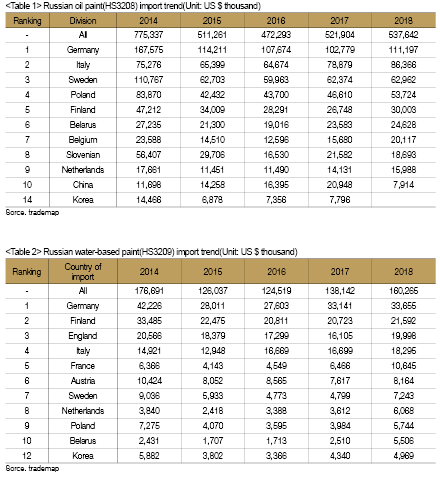 Imported products account for approximately 30% of Russia’s paint market, while the remaining 70% is made up of Russian brands and foreign brands with a presence in Russia. Russian brands produce low-value-added, low-costs paints, while high-quality, anti-rust and anti-pollution or industrial-grade paints are predominantly produced by foreign brands. 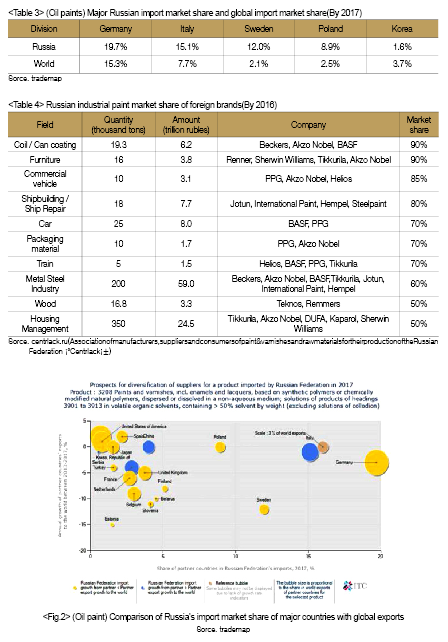 (1) Russian Marine Paint Demand
Vessel-use paint demand in Russia is increasing rapidly following the Russian government’s support for the shipbuilding industry. According to a survey by Rosneft, owner of Far East Center of Shipbuilding and Ship Repair Center, in 2016 the figure was approximately 18,000 tons, worth approximately 8 trillion Rubles, a 33% increase from 2012. Looking at paint demand based on parts of a ship, underwater hull-use paint made up for most demand, followed by cargo-use paint. Demand for underwater hull paint is approximately 6,700 tons, accounting for 47% of demand. This includes 3,300 tons of primer for antifouling coating and 2,800 tons of antifouling paint.
Upon breaking-down demand, the following is observed: finishing enamel and paint makes up 65%(9,200 tons) and finishing primers make up 34%(4,800 tons). In Russia, the paint market for icebreakers is only 3% of demand. However, following increased icebreaker production, demand for paint which can withstand extreme temperatures is also increasing. Upon classifying demand according to purpose, approximately 10,600 tons are used for newly built ships and approximately 3,100 tons are used for ship repair and maintenance. 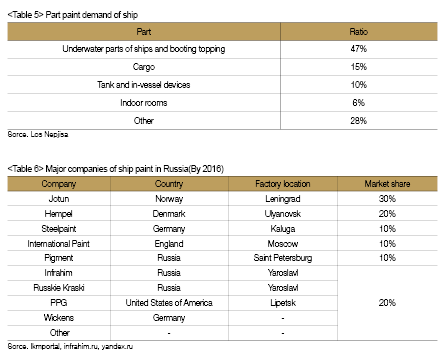 (2) Russian Marine Paint Competition Trends
Foreign companies dominate Russia’s marine paint market. Rosneft, upon analysis, uncovered that this is due to Russia’s lack of technology and R&D to produce functional industrial paint. According to the Russian Paint Association, 80% of Russia’s marine paint market is occupied by European companies - major companies are shown in Table 6. Major foreign companies such as Jotun, Hempel, Steelpaint, and International Paint are establishing production facilities in Russia and are aggressively targeting the Russian market.

(1) Shipbuilding Prospects in Russia
According to Rosneft, approximately 70 vessels(totalling 3.6 million tons) are expected to be constructed between 2016 to 2020. The prospect includes Sovcomflot, Russia’s largest fishing company and one of the world’s biggest tanker company’s plans to construct 30 new tankers and gas carriers.
According to ‘Transport Strategy of the Russian Federation for the period up to 2030’, 406 new ships(totalling 11.7 million tons) are planned between 2021 to 2030. Furthermore, according to Rosneft’s report, approximately 270 new fishing vessels will be needed from 2025 to 2030 in accordance with the fishing vessel modernization plan. These forecasts, of course, assume that the Russian ship market will develop optimistically, as a result, approximately 700 new vessels can be expected.

(2) Shipbuilding Status of Far East Shipyards and Korean Paint Demand
In an interview with Company L’s CEO, one of Zvezda Shipyard’s major dealers, it was stated that “over 70% of Zvezda Shipyard’s major shipbuilding processes are carried out by foreign companies, of which 30% is steel plate welding, part electrical equipment fitting and paint jobs. Company L plans to increase efforts in ship construction in lieu with Zvezda’a modernization plans. Zvezda currently self-procures steel plates, welding rods, paint and electrical equipment. However, Company L has stated that they are currently on the look-out for a Korean paint supplier. Zvezda has no option but to show interest in Korea’s anti-fouling paints as Russia’s main marine paint manufacturer and other producers do not have paint manufacturing facilities in the Far East. It would be costly to transport paint produced in Russia’s western regions to shipyards in the Far East.