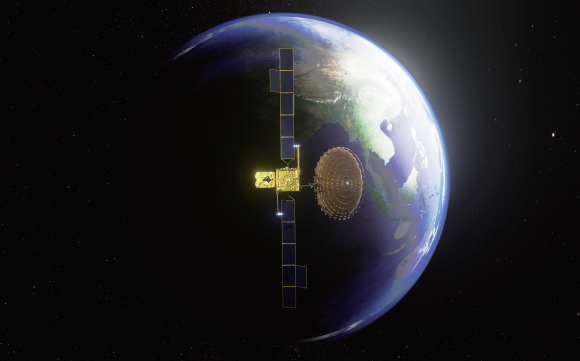 I-6 F1, the most sophisticated commercial communications satellite ever launched, has reached geostationary orbit and begun on-orbit testing, Inmarsat, the world leader in global, mobile satellite communications, has confirmed. Carrying both L-band and Ka-band payloads, I-6 F1 will deliver a further enhancement of Inmarsat’s world leading ELERA and Global Xpress networks respectively.
The satellite, the size of a London double-decker bus, with a solar array ‘wingspan’ larger than a Boeing 767, was launched by MHI in Japan in December 2021. Since its launch, it has been moving towards geostationary orbit(GEO) approximately 36,000km(~22,500 miles) above the Earth via its all-electric propulsion system. It has now arrived at its test location over the Atlantic and has begun a thorough and extensive testing programme before moving and entering service over the Eastern Indian Ocean in early 2023. Ground stations at Perth and Merredin in Western Australia will support I-6 F1 service.
The satellite will soon be followed by its ‘identical twin’, I-6 F2, which has just completed testing at Airbus Defence and Space facilities in Toulouse, France. It is due to be launched in Q1 2023 by SpaceX.
The launch of the I-6s sustains the momentum underpinning Inmarsat’s growing business and technology leadership in global mobility communications. I-6 plays an integral role in the exceptionally reliable GEO infrastructure that underpins Inmarsat ORCHESTRA - the world’s first network that will combine GEO, highly elliptical orbit(HEO), low Earth orbit(LEO) and terrestrial 5G into one harmonious solution.
The I-6 satellites deliver an enhanced platform for innovative technology developers looking to go global quickly with world-changing products. ELERA enables new markets, including the rapidly growing Industrial Internet of Things(Industrial IoT) satellite connectivity segment, by providing dramatically increased network capacity and resilience.
The I-6 satellites, like all Inmarsat ELERA and GX spacecraft, are backward-compatible with existing terminals, ensuring that current and future customers will continue to benefit from new advances. They also add further depth in Inmarsat’s global coverage for even greater assurance to customers of the redundancy and resilience of Inmarsat’s world-leading L-band network.
The GX6 payloads hosted on the I-6s add targeted high capacity to Inmarsat’s high-speed GX network, ensuring it continues to support the growing need of commercial and government customers for data, particularly in congested regions or hotspots where it is needed most.