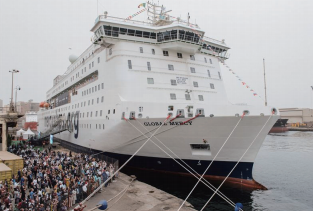 On behalf of the charity Mercy Ships, Stena RoRo has been responsible for the construction of the Global Mercy, the world's largest civilian hospital ship. The ship has now been ceremoniously inaugurated in Dakar, Senegal. While the celebrations were still underway, the crew had already begun with the ship's first mission in strengthening African healthcare.
Stena RoRo specializes in designing ships for special needs. Project management for the construction of the Global Mercy has been underway since 2013 and has involved several European, American and Asian subcontractors. Construction was carried out at the Tianjin Xingang shipyard in northern China where Stena RoRo had an international team on site for monitoring the construction process.
Per Westling, managing director for Stena RoRo, was present at the inauguration of the vessel in Dakar.
“For us, this marks the end of our extensive involvement in a major, multi-year project. For Mercy Ships, the inauguration marks the beginning of something new. With the Global Mercy in full operation, the organization's ability to help the less fortunate in need of care more than doubles. They are doing a fantastic job and we are very proud and happy to have been a part of it.”