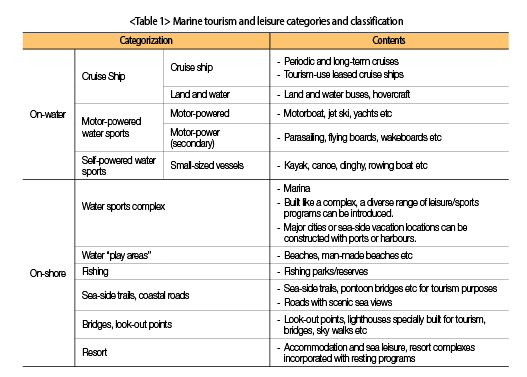 (1) Overseas trends and forecasts
① Global marine tourism and leisure market size expected to grow to $232.4 billion by 2020
Since the 1994 United Nations Convention on the Law of the Sea(UNCLOS), developed countries have reaffirmed the value and importance of the ocean and have developed a maritime strategy at the national level. They have consistently and actively promoted the use of the sea as a leisure space. According to statistics from the World Ocean Industries Association(ICOMIA), the global marine leisure industry size grew from $47 billion in 2006 to $75.1 billion in 2010 and is expected to grow to $232.4 billion by 2020. The World Tourism Organization(UNWTO) has selected the marine leisure industry as a high-growth industry and expects it to account for 50% of the future global tourism market.

② Continuous growth trends arising from marine culture and infrastructure
Analysis of the marine leisure equipment market size consisting of motor boats and sailing yachts, etc, portrays growth from $17 billion in 2005 to $28 billion in 2015. The sailing yacht market size also grew drastically from $8 billion to $13 billion within the same period. The number of total ships sold globally increased from 23 million in 2006 to over 27 million in 2010, and the trend is expected to continue to reach over 38 million by 2020.

(2) Domestic trends and forecast
① Demand for marine tourism and leisure is steadily increasing
Growth in national income, increased leisure time, and the saturation of land-based tourist destinations is changing people’s interests towards sea-based tourism. Also, the change in marine leisure trends has seen steady growth in the market size since 2010. Domestic marine leisure equipment ownership has doubled from 4,178 in 2005 to 8,232 in 2010 and is expected to grow to 25,700 in 2019, fueling a $700 billion market.

② Establishing government policies to secure new demand for marine tourism and leisure
Government’s attention to policy is growing in order to foster demand for marine tourism and leisure. The development of six marinas was prioritized in 2017 as well as permitting residences within marina complexes. Also, marina facility leasing and membership basis provision actively promote investments for diverse marina development. In addition, seven marine leisure centres were to be established by 2017, with plans for small mooring facilities to be installed at 10 major marine tourism destinations to improve accessibility for boats and yachts. To strengthen market competitiveness, a special development strategy should be established by dividing the coastline by region and designating marine leisure pilot schools to expand a marine leisure base. 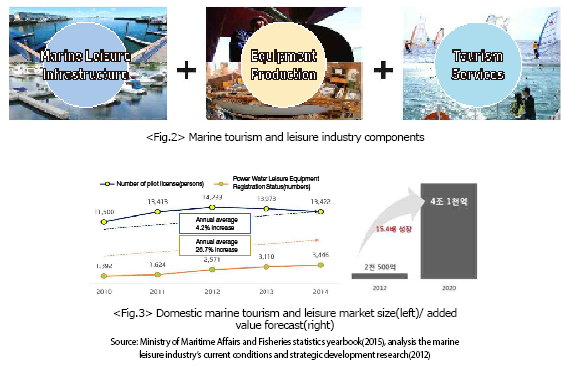 (1) Marina industry
① Global market
There are 23,000 marinas worldwide, 28.4 million leisure vessels, and the leisure vessel market is estimated at $44.5 billion. Despite a downturn post-Global Financial Crisis, the number of superyachts has nearly tripled in the past five years to over 6,000 vessels. More than 85% of the leisure vessel market is accounted for by North America and Europe. Furthermore, Australia and New Zealand are emerging as major players due to rising yachting recognition and demand growth. Amongst Asian nations, China is developing large marina ports: Qingdao(1,466 berths), Xiamen(1,450 berths), Sanya(600 berths). Also, Taiwan, with a focus on small and medium enterprises for superyacht production, is the world's sixth largest producer.

② Domestic market
The domestic leisure vessel (yacht and boat) market has been growing rapidly over the past five years with the number of leisure vessels more than tripling and pilot vessels more than doubling. On the other hand, there were 46 marinas in 2013 with 30 under full operation, and eight under development. However, this is only a tenth of Japan which has 570 marinas, highlighting Korea’s insufficient supply compared to demand. In addition, there are only about 10 leisure vessel manufacturers, which shows that the basis for the marine tourism and leisure industry is weak.

② Domestic market
In response to the rapid growth of the global cruise tourism market, the number of cruise tourists visiting Korea has risen more than 20-fold from 30,000 in 2005 to 800,000 in 2013. However, with most visitors only stopping over for one day, further efforts need to be made to encourage longer visitations. In 2013, out of the 414 port entries, a mere 14% or 60 port entries visited for two days or more. In Jeju Island alone, the 189 port entries saw an inflow of over 390,000 passengers making it a stronghold in the domestic cruise tourism market.

(3) Marine ecotourism
① Global market
Ecotourism is one means of travel by experiencing, observing and understanding nature whilst minimizing environmental damage. In recent years, interest in environmental and ecological protection has increased rapidly, thus ecotourism had grown three times faster than general tourism from the 1990s to the mid-2000s. According to the UNWTO, ecotourism accounted for 7% of the global tourism market in 2007.

② Domestic market
The expansion of the five-day workweek and the formation of the ‘experience tourism' market has lead to continuous growth in tidal flat exploration and bird-based tourism. Following the opening of the Changwon Ramsar Convention in 2008, interest in ecotourism has increased, and in the case with Sunchon Bay, it was experienced over 3 million visitors annually. The number of domestic visitors to marine reserves increased from 2.46 million visitors over five reserves in 2009 to 2.72 million visitors over seven reserves in 2012, the rise in the number of eco-tourists was predominantly at the Sindoori coast sand dunes and marsh wetland reserves.

② Domestic market
The active leisure fishing population in Korea increased by 13.8% from 5.73 million in 2005 to 6.52 million in 2010. The fishing goods market was worth KRW 326.9 billion(USD 280 million) and the service sector was worth KRW 1.3 trillion(USD 1.1 billion). In total, the domestic fishing leisure fishing industry was worth KRW 1.71 trillion(USD 1.5 billion). In 2013, the government established the “Basic Plan for Fishing Promotion” to improve fishing environment, expand the fishing equipment market, and educate fisherman by planning on investing KRW 30.8 billion(USD 26 million) by 2018.

(5) Underwater leisure industry
① Global market
The global underwater leisure population has grown exponentially since the 1960s currently with an estimated population of 6 million people and an annual market size of $40 to $60 billion. Currently, there are over 30 organizations and associations including the World Underwater Federation and the Professional Diving Instructor Association with a focus on education, equipment and facility accreditation.

(1) Review of legislative conditions
① Internal condition review
Geographically, Korea is located in the middle of Northeast Asia and is able to attract tourists from the region, especially China. In addition, being a peninsula with unique coastal marine tourism resources is able to meet a variety of tourism demands. However, the domestic marine tourism and leisure activities are limited due to a lack of professionals and interconnection between tourism resources. There is a lack of tourism goods and high, value-added contents from underdevelopment, lack of accommodation, etc. at beaches and other preexisting tourism destinations.

② External condition review
Following the implementation of the five-day workweek and an improved national income has led to an increase in interest and participation in marine tourism and leisure activities. Also, there is a greater inflow of foreign tourists from the ‘Hallyu'(Korean) wave and a growing tourism market in Northeast Asia. In addition, greater attention to policy and support is expected to help expand the creative economy. However, considering an unstable global economy, there is a concern that fluctuating tourism demand and inflation will cause tourist activities to contract. In order to overcome these issues, the government ought to formulate pre-emptive, middle-term policies in preparation to cope with short term risk factors as seen in the Ministry of Maritime Affairs and Fisheries’ ‘Basic Plan of Marine Tourism Promotion’.

③ Domestic policy trends
In addition to suggested marine tourism set forth by the Ministry of Maritime Affairs and Fisheries’ inaugural ‘Basic Plan of Marine Tourism Promotion’ in 2004, the government announced a second marine tourism promotion plan in 2014, which includes mid- to long-term measures to advance marine leisure sports. Through R&D for the development of new marine leisure and tourism, selection and promotion of leading businesses, and development of the industry and create economic development opportunities, the government is aiming to expand the number of professionals in the marine tourism and leisure industry by 2023. In addition, seven specialized coastal jurisdictions were established according to regional conditions.

(2) Marine tourism and leisure trends
① Increased interest in health and healing, and the need for products tailored to global trends
With an ageing population, interest in rest, healing, and health are increasing, and marine healthcare and healing programs are being emphasized. In addition, reduced spatial distances from improved transportation and information and communications have facilitated international socio-cultural exchange and the emergence of converging cultures, establishing an environment capable of effectively attracting tourists. SaeManGeum’s proximity to China and Japan is ideal for attracting tourists. Therefore, it is necessary to provide tourist services such as food and accommodation as well as developing tourist products that interconnect marine culture and various other resources.

② Marine tourism and leisure contents are leading future tourist trends
As in-land tourist activity spaces gradually move towards the coast, interest and demand in marine leisure is increasing. In Korea alone, people experiencing marine leisure sports grew 21.6% from 600,000 in 2012 to 730,000 in 2014. It is now time to strategically approach the vitalization of marine leisure sports through infrastructure developments and strengthened services. Ideal conditions need to be established to satiate SaeManGeum’s marine leisure demand.

③ Importance of ecological value and demand division emphasizing emotional and experience-led tourism
Increasing interest in climate change and sustainable tourism behaviour in conjunction with the government’s green growth are emphasizing the need for environmentally-friendly tourist development projects and policies to cope with increasing demand for ecological experiences. In addition, social phenomena emphasizing the importance of society’s individuality and sensitivity as well as reinforced information sharing through SNS’s expansion, tourism content development trends are changing. Furthermore, in order to cater to these trends, the industry to pursuing customized tourism contents and value-added product development.