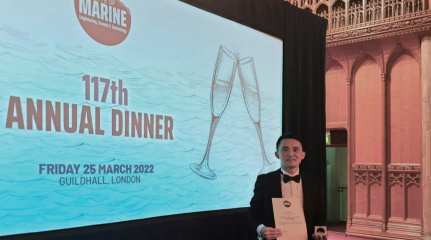 Korean Register(KR) Senior Surveyor, HA Seungman, has been awarded the prestigious Denny Medal from the Institute of Marine Engineering, Science & Technology(IMarEST). The renowned Denny Medal is awarded to the best paper published in the Journal of Marine Engineering and Technology(JMET) and the Journal of Operational Oceanography(JOO).
Ha won the award for his work on the research paper ‘Regulatory gaps between LNG carriers and LNG fueled ships’, which identified the need to improve international safety codes for LNG carriers and LNG fueled ships. The paper is expected to serve as a guide for shipbuilders and classification societies to implement the relevant regulations.
The paper was published in the January 2019 issue of JMET while Ha was studying for his master’s degree in Green Ship Technology at the Korea Maritime & Ocean University(KMOU) in Busan and working at KR simultaneously.
Through his work at KR, Ha has become an expert in safety regulations of LNG carriers and LNG fueled ships, carrying out plan approval of ships and participating in international assignments for the International Association of Classification Societies(IACS).
Ha’s work on the use of LNG in the maritime sector is particularly important as the fuel, which is more environmentally friendly than conventional fuel oil, increases in popularity as a result of the International Maritime Organization’s stricter regulations on ship’s emissions.
Together with leading domestic and foreign shipyards, KR has been developing key LNG technologies for years, achieving excellent research results based on KR’s long-standing, high-level resources and expertise.
In September 2020 KR launched its LNG Fuel and Bunkering Simulation Center at its headquarters in Busan to help facilitate industrial growth across the LNG propulsion and bunkering sector
Ha received his award at the 117th IMarEST Annual Dinner on 25 March, which was attended by more than 400 marine experts. The ceremony was originally scheduled to take place in 2020 but was postponed due to the Covid-19 pandemic.