Released in August, the UN’s Intergovernmental Panel on Climate Change(IPCC) Sixth Assessment Report reached some disturbing conclusions about climate change. For the first time, the IPCC identified human activity as a root cause for a warming planet and noted that “Global warming of 1.5°C and 2°C will be exceeded during the 21st century unless deep reductions in carbon dioxide(CO2) and other greenhouse gas emissions occur in the coming decades.” More recently, a draft of the Glasgow Agreement, released at COP26 in November, recognized that “… limiting global warming to 1.5°C by 2100 requires rapid, deep and sustained reductions in global greenhouse gas emissions. 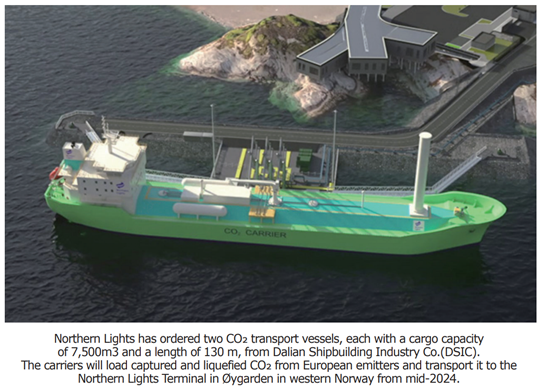 To slow global warming, the focus has been on abatement strategies, such as efficiency measures and further investments in alternative, low carbon fuels. As for removing carbon emissions at the source, analysts agree that carbon capture and storage(CCS) will be necessary to achieve meaningful reductions in CO2. As noted by DNV’s Pathway to Net Zero Emissions, a DNV study released in late October, “Carbon capture and removal technologies are a must …” if the world has any chance of meeting the 1.5°C limit.
Work to scale up carbon capture has already begun. To date, there are 16 large-scale carbon capture facilities capturing more than 30 million tonnes of carbon per year from fertilizer(ammonia), steel and hydrogen production and from natural gas processing plants. Safe storage of CO2 is also a proven technology. For decades, energy companies have injected pressurized CO2 into reservoirs to displace oil and drive it to the surface. 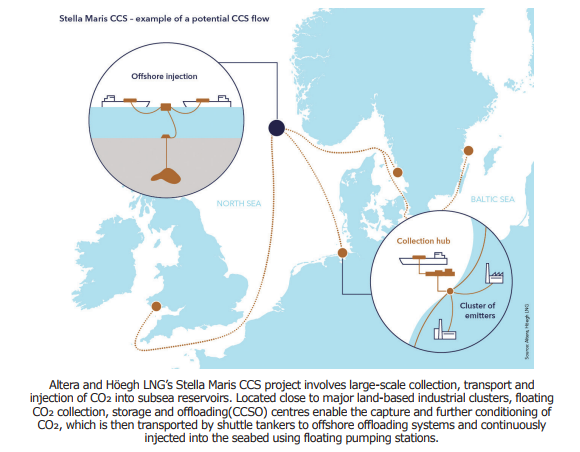 According to Erik Mathias Sørhaug, Business Development Leader – Maritime Advisory, DNV, large quantities of CO2 need to be transported from the capture site to storage either by pipelines or ships, or a combination of both. “Shipping offers a safe, reliable and flexible transportation well-suited to shorter distances and low to medium volumes,” he says. “In our view, scaling up global CCS capacity will require a fleet of specialized tankers with the ability to collect CO2 from capture sites operated by many different industrial segments.”

Pioneering the transportation of liquified CO2

While shipping represents an alternative to pipelines, there are some technical challenges that need to be addressed. Martin Cartwright, DNV’s Business Director Gas Carriers & FSRUs, explains that to efficiently transport CO2 at industrial scale, the industry is looking into different options for how to transport CO2 including high-, medium- and low-pressure solutions, which will help integrate seaborne transportation into the CCS value chain. “DNV has offered class services to CO2 carriers since 1988,” he says. “Through our work with various partners, we have developed expertise specific to vessels design, specialized tanks, piping and refrigeration systems for the transportation of liquified CO2.”

Alternatives for transporting CO2 at both high and low pressures

Johan Petter Tutturen, Vice President, Special Projects – Gas, at DNV explains that present experience with shipment of CO2 is with medium-pressure solutions. “Low-pressure solutions will allow for larger cargo tanks, which enhances a vessel’s transportation capacity and allows for more CO2 per transported unit volume,” he says. “However, low-pressure transportation of liquified CO2 introduces new risks and challenges that need to be thoroughly investigated to ensure safe and reliable operation. Unlike natural gas, CO2 must be pressurized to reach a liquid state. Pure CO2 has a ‘triple point’ at 5.12 bara and ÷56.6°C. For temperatures below the triple point, CO2 will only exist as gas or in solid states.”
Tutturen says that existing CO2 shipment is carried under medium pressure(13–15 barg and at ÷20–÷30°C) on smaller carriers serving the food and beverage industry, but the industry is exploring other pressure options. “DNV is actively participating in several Joint Industry Projects evaluating alternatives for transporting CO2 at both high and low pressures,” he says. “Factors being considered, among others, include choice of material for the containment system, effect of impurities in the cargo, transport volumes, safety considerations, and achieving the optimal balance between cost and operational complexity.” 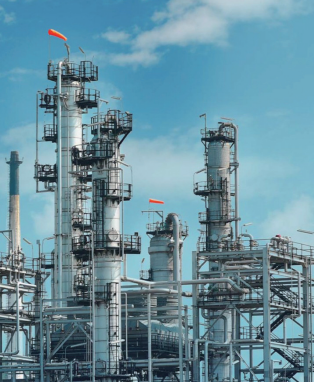 On 15 December 2020, the Norwegian Government announced its funding decision for full-scale demonstration project “Longship” for the capture, transportation and storage of CO2. The Longship project includes the Northern Lights project, a joint venture that includes Equinor, Shell and TotalEnergies, and is focused on the transportation and storage of CO2. In the first phase, the project will capture CO2 from industrial sources in the Oslofjord region and ship it in liquid form to an onshore terminal on the Norwegian west coast, where it will be carried by pipeline to an offshore storage complex in the North Sea. In October, the project announced the construction of two dedicated CO2 carriers, with a cargo size of 7,500 cubic metres.
Cartwright notes that while the first phase of Northern Lights only aims to store 1.5 million tonnes per year the project’s ambitions are to scale up capacity, allowing capture sites all over Europe to store CO2 at the Northern Light’s facility. “Northern Lights has shown how a public–private partnership can be leveraged to make this flexible CCS concept a reality and inspire other groups to develop their own CCS projects,” he says. 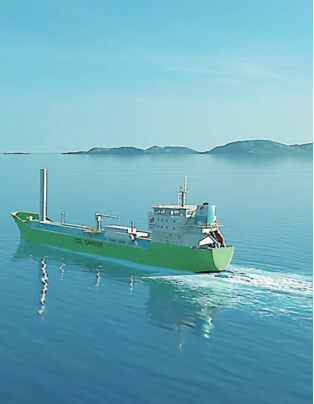 Another project, known as Stella Maris and currently in the planning stages by Altera Infrastructure and Höegh LNG(and other partners), has benefited from an informal dialogue with the Northern Lights team. “We plan to develop and manage the entire CCS value chain, from loading at port, ship transport to field and continuous injection of up to 10 million tonnes of CO2 per year into offshore reservoirs,” says Christian Fjell, Director, Sustainability for Altera Infrastructure. “We will have greater capacity than the Northern Lights pilot project, but as a first mover in this space, they have helped show the way.”
In addition to a large storage capacity, the Stella Maris project will include three or four DP II liquified CO2 shuttle tankers delivering to a fixed or floating injection offshore unit, connected to a subsea wellhead. “To keep our own carbon footprint low, the tankers will be fuelled by LNG, but can take other low carbon fuels as they become available,” says Frank Wettland, Project Manager for Altera Infrastructure. “In addition, the tankers will power the unmanned injection unit, helping to reduce our power consumption.”

Wettland says the Stella Maris business case is grounded in the EU’s Emissions Trading Scheme and has benefited from government policy in Norway. In fact, the project was recently awarded partial funding from Gassnova, the Norwegian state enterprise established to promote CSS technology. But he is confident that Altera Infrastructure’s decades of experience in the production, storage and transportation of oil and gas can be applied to the transportation and storage of CO2, putting the company in a strong position to capitalize on the growing CCS market.
“Together with our partners, we have the expertise to develop a commercially viable offshore CCS solution,” he says. “As other regions tighten regulations on carbon emissions or introduce carbon pricing, the Stella Maris concept can be applied to any region with offshore storage capacity. And that means more opportunities for shipping.”

Nevertheless, everyone agrees that scaling up CCS infrastructure will take time. Sørhaug notes that while the technology is more or less in place, it will require collaborative action involving regulators, politicians, industry stakeholders, class and suppliers to make a difference. “As demand for flexible transportation of liquified CO2 increases, we believe those owners active in the gas carrier segment who are willing to partner with other stakeholders on CCS projects will be rewarded in the years ahead.”