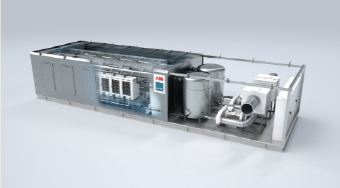 ABB and Ballard are progressing with their industry-leading partnership to decarbonize marine transport and have received an AiP from DNV for their high-power fuel cell concept, the development of which was launched in 2018. An AiP is a major milestone in developing new technology as an independent assessment of the concept, confirming that the design is feasible and no significant obstacles exist to prevent the concept from being realized. With the AiP in place, the jointly developed solution can be completed within the next couple of years for application onboard a wide range of vessels.
The high-power fuel cell unit is a flexible solution that will support the energy needs of a diverse range of vessels requiring multiple 3 MW blocks of power. A cruise vessel operating in coastal areas could either run entirely on fuel cell power or switch to it when operating in environmentally sensitive areas or emission control zones, while a ferry with a regular schedule and frequent bunkering opportunities could operate solely on fuel cell power. For ocean going vessels, fuel cell power could support auxiliary needs. The concept of the solution also envisions the integration with an energy storage system.
The successful development of a high-power fuel cell system concept builds on a collaboration between ABB and Ballard, the leading global provider of proton exchange membrane (PEM) fuel cell solutions, initiated in June 2018. As part of its strategy to develop alternative emission-free technologies, ABB is already well advanced in collaborative development of fuel cell systems for ships. Considered among the most promising technologies available in terms of greenhouse gas reduction, zero-emission hydrogen fuel cells are already powering smaller vessels over short distances and the technology is on the verge of being ready for installation on larger ships.
Shipping contributes close to three percent to global greenhouse gas emissions(GHG) every year and pressure to transition the industry to more sustainable power sources has resulted in fixed reduction targets from the International Maritime Organization(IMO), a United Nations agency responsible for regulating shipping. IMO aims to cut for GHGs from ships by at least 50 percent by 2050 from 2008 levels.
Fuel cells turn the chemical energy from hydrogen into electricity through an electrochemical reaction. When renewables are used to produce the hydrogen, the entire energy chain can be clean. Having a larger, megawatt-scale power unit makes it feasible to combine units to reach much higher total power than is practically possible with smaller power units.
Demand for hydrogen, which has grown more than threefold since 1975, continues to rise. Scaling up technologies and bringing down costs of production is vital to enable hydrogen to become widely used. ABB is collaborating with customers and partners to develop and integrate technology that will make hydrogen an accessible, affordable component of the world’s low carbon energy mix. In Italy, ABB is partnering with Swiss utility company Axpo to develop modular green hydrogen plants that aim to create an optimum operating model to produce affordable, green hydrogen. In France, ABB is supplying its Freelance distributed control system and ABB Ability™ Manufacturing Operations Management digital platform to the first production site for Lhyfe, a producer and supplier of 100 percent green hydrogen. ABB is also working with Hydrogen Optimized, a sustainable energy conversion company in Canada, to jointly explore the development of large-scale green hydrogen production systems connected to the electrical grid to offer a clean, sustainable, and affordable energy carrier.