As a zero-emission fuel with availability around the world, hydrogen has the potential to transform modern society. Harnessing fuel-cells as the power source for mobility, household, and industry as well as fueling gas turbines are the most visible of society’s growing initiatives to exploit hydrogen energy, but considerable work remains before a ‘hydrogen society’ can be supported on an industrial scale. One key component will be the ability for ships to carry large amounts of hydrogen worldwide.
From the viewpoint of transportation efficiency, practical options include the carriage of liquefied hydrogen in bulk, the organic chemical hydride method and deriving hydrogen from transported ammonia. In the latter two cases, transportation is possible using conventional chemical tankers or liquefied gas carriers according to IGC Code or other established safety requirements. The existing statutory framework has also been under development to cover the carriage of liquefied hydrogen, which is considered to be the most efficient method.
As liquefied hydrogen must be kept at temperatures below -253°C to maintain its liquid state under atmospheric pressure, however, it presents an even tougher handling and storage challenge at sea than LNG.
ClassNK responded to the expectations for liquefied hydrogen transportation provided in 2017, publishing a comprehensive set of “Guidelines for Liquefied Hydrogen Carriers”. The guidelines took in the provisions of IMO’s Interim Recommendations for Carriage of Liquefied Hydrogen in Bulk, adopted by the MSC in 2016, and prescribed each item as a more specific requirement based on scenarios for possible accidents to ensure the safety of liquefied hydrogen transportation.
The IMO Interim Recommendation was developed primarily based on a comparison of physical properties of Methane as main components of LNG and liquefied hydrogen. Both are cryogenic and nontoxic, and both generate flammable high-pressure gas. 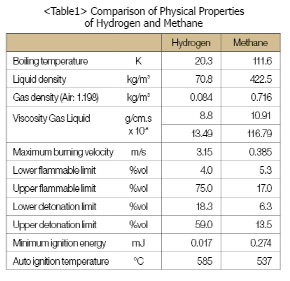 Comparing and examining the physical properties of hydrogen and methane, the key hazards related to liquefied hydrogen can be identified as
(1) Low ignition energy,
(2) Wider flammability range,
(3) Low flame visibility during fires,
(4) High burning velocity, which may lead to detonations with shockwaves,
(5) Condensation(liquefaction) and coagulation(solidification) of gas constituting inert gas and air, which may lead to the formation of a low-temperature atmosphere with a high concentration of oxygen commonly known as a strong combustion aid if mixed with flammable gas such as hydrogen and also could result in clogging of pipes when solidified
(6) High permeability,
(7) Low viscosity,
(8) Hydrogen embrittlement of materials for tank, piping and process equipment including welds. 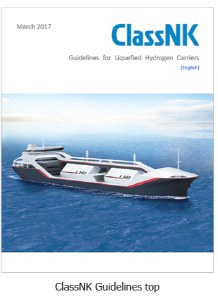 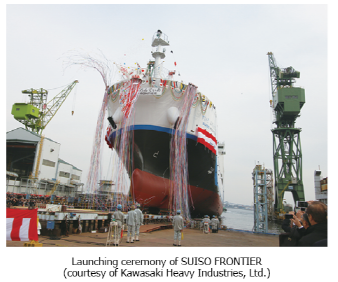 For a risk assessment to be conducted in an exhaustive manner for the design specifications of an individual ship carrying liquefied hydrogen cargo, it must consider risks to persons on board, the environment and the structural strength/integrity of the ship, with adequate countermeasures proposed. Key items, such as possible vent release scenarios, vent fires, gas diffusion analysis, boiling liquid, expanding vapour explosion, the possibility of explosions and detonations in enclosed compartments, and the loss of a single vacuum compartment in a vacuum insulation system must be specified in detail.
The guidelines developed by ClassNK in support of liquefied hydrogen transportation have already been applied in an actual project. They have been used to as part of the world's first liquefied hydrogen carrier, built by Kawasaki Heavy Industries, Ltd for the CO2-free Hydrogen Energy Supply-chain Technology Research Association(HySTRA). HySTRA is the consortium “established primarily to achieve technologies and carry out demonstration of everything from production of hydrogen via effective use of brown coal through to transportation and storage of said hydrogen, aimed at the cultivation of a CO2-free hydrogen supply chain and its commercialization”. Named SUISO FRONTIER, the resulting vessel has a length overall of 116m and cargo tank capacity of approx. 1,250 m3 and was launched in December 2019. Its construction is expected to be completed by late 2020, according to KHI.
ClassNK received the application for classification survey during construction for this momentous vessel and carried out the verification and validation in line with its guidelines and applicable rules. In the meantime, ClassNK is updating the guidelines based on experience and knowledge acquired through design and construction, and as the ship approaches its operational phase, in its role of ensuring safety for the transportation of Liquefied Hydrogen by sea.